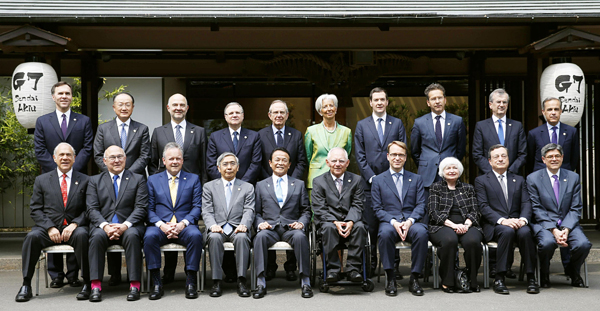 Japanese Finance Minister Taro Aso, fifth from left in front row, poses with other finance ministers and heads of central banks of the Group of Seven for a group photo in Akiu, northern Japan, on May 21, 2016. [AP/NEWSIS]

As central banks in advanced economies — including the Bank of England, the Bank of Japan (BOJ), the Swiss National Bank and the U.S. Federal Reserve — hold their policy meetings this week, they will all confront tricky questions about the management of national liquidity and cross-border influences.

The most fascinating discussion, however, will take place at the BOJ, which has an additional challenge: It has moved closest to the line that separates effective policy measures from ineffective and counterproductive ones, and it may even have already crossed that line.

Unconventional central bank policies are overstretched and near exhaustion, having carried the bulk of the burden of promoting economic growth in the last few years. Yet officials cannot step back lightly from their excessive policy responsibilities because most governments are not able to step in to compensate, even though they have much better tools at their disposal. As a result, all these central banks face the delicate task of continuing their experimental support for the economy while minimizing the longer-term risks for economic well-being and financial stability.

This trade-off is made more difficult in some cases by concerns about currency appreciation. Another source of complications is the June 23 referendum on whether the U.K. will leave the EU. A vote in favor of “Brexit” could cause significant equity-market volatility and sharp currency movements, and central banks need to consider contingency measures that minimize adverse spillovers onto their national economies. For the BOJ, these complex challenges are amplified by a sense that its policies have become less effective, if not ineffective and potentially counterproductive.

In February, BOJ policy makers surprised markets by taking interest rates into negative territory in the hopes of depreciating the currency and encouraging higher economic activity. The opposite happened. As the currency rose along with popular anger about subzero interest rates, the bank also found itself in the middle of a political storm.

At the policy meeting that followed, officials decided to hold off and see how markets would react. Once again, the currency strengthened, adding to the central bank’s discomfort.

These counterintuitive outcomes for the BOJ are underpinned by partial indicators that the private sector is increasingly looking to disengage from the formal financial system. This adds to the central bank’s worries because it limits its policy effectiveness and raises questions about the institution’s credibility.

This type of disengagement is historically very rare in the advanced world. It is more common in emerging countries, especially those where institutions are weak and central banks are coopted by governments that are mismanaging the economy.

As the yen continues to trade too high for the well-being of the fragile domestic economy, the BOJ will be inclined to try to do more, hoping that the government will make progress on stalled structural reforms. But rather than drive interest rates further below zero, which would be highly visible and unpopular, the central bank is likely to expand the use of its balance sheet to purchase financial assets.

The BOJ remains in the business of buying time for the economy, but is doing so in an increasingly less certain fashion. Like its counterparts in Europe and the U.S., it hopes that a more forceful policy response by the government will eventually ease some of the excessive burden it has been carrying and save it from becoming woefully ineffective. Unfortunately, given the political situation, such hopes are likely to remain unfulfilled, amplifying the risk that central banks in the advanced world, starting with the BOJ, could find themselves contributing to the economic malaise rather than easing it.


*The author is a Bloomberg View columnist. He is also the chief economic adviser at Allianz SE. His new book is “The Only Game in Town: Central Banks, Instability and Avoiding the Next Collapse.”