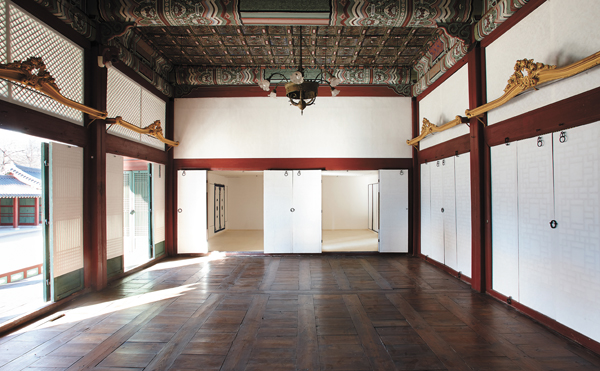 The interior of the Hamnyeong building of Deoksu Palace has been restored with the newly papered walls and new linoleum on the floors.[JEON HO-SUNG]

Earlier this spring, the Cultural Heritage Administration (CHA) opened the doors of the Hamnyeong building of Deoksu Palace in central Seoul to the public for a brief period.

The east room of the building was where the kings once slept, while the west side was for the queens.

The Arumjigi Culture Keepers Foundation, a nonprofit organization founded to protect and preserve the beauty of Korea, was also involved in the renovation of the building. The project was undertaken in order to bring the old building to life and preserve its history for the current generation.

The floors and walls have been decorated in a style reminiscent of the era. On the windows, traditional curtains called muryeomja have been hung.

As in many cultures, the palaces of Korea are the finest constructions that abide by the strictest standards and formality of the time they were built. And the best architects and craftsmen built them using the finest techniques. Therefore, in decorating the interior of the buildings it was necessary to maintain tradition.

For the past two years, the foundation, the CHA, the Deoksu Palace management office, and the National Trust for Cultural Heritage have been discussing the restoration of Korean cultural heritage, including palaces.

Then, last July the luxury fashion brand Hermes joined in, agreeing to support the project “Korean Heritage Guardians.” The brand is assisting the work of the craftsmen who preserve Korean heritage for future generations.

“The constant support for domestic masters and the participation in helping to organize the intangible assets will allow cultural heritage to be handed down better to the next generation,” the Korean branch of Hermes said.

For the latest project, Deoksu Palace has been chosen in order to showcase the living culture of the Joseon Dynasty. The Arumjigi Culture Keepers Foundation invited six masters to participate in the palace project.

The restoration of Hamnyeong started with hanging new wallpaper and laying new linoleum on the floor. For the walls, master Hong Jong-jin applied new flower-print paper, or neunghwaji. Neunghwaji is made by pressing paper into a mold to create a raised flower-shaped design.

“High class nobles liked to decorate their houses with neunghwaji in the Joseon Dynasty. Not only was it used for wallpaper, but also for book covers,” Hong explained. “Also, each family had its own unique pattern. Only some shapes were restricted from use, which were dragons, the Chinese phoenixes and clouds. These were only used by royal families.”

Over the newly painted window, muryeomja were hung. Although these traditional curtains were used in the past, in the present day authentic ones no longer exist.

To recreate them, an advisory committee consisting of Cho Hyo-sook, the vice president of Gachon University; Kim So-heon, the dean of the department of traditional Korean costume at Baehwa Women’s University; and Jeong Min-ja, adviser to the Arumjigi foundation, was formed. They worked with a team of researchers: Kim Jeong-a, chief researcher of the foundation; Yoo Seon-hi, a master of quilting; Hong Seong-hyo, a master of wood furniture; and Kim Eun-young, a master of knotting.

Kim Myeong-gil, the last court lady of the Joseon Dynasty, wrote a book titled “Near Nakseonjae” in 1977 in which she described the living style of the palace.

The book states: “During winter, the sleeping chamber of the king and queen is surrounded by thick curtains made out of a kind of Chinese silk, mobondan, with cotton quilting. On the ceiling, drapery is hung as well to block the cold winds from all sides of the room. The windows and the doors were also covered by hanging green muryeomja that makes the room all the more comfortable and warm.”

From this and other historical records, the team was able to recreate the muryeomja. Like Western-style curtains, muryeomja are parted in the middle. Also, the curtains are rolled up and fastened with a loop during the daytime.

With the help of the Seoul Museum of History, the research team was able to see the four examples of the draperies and curtains in Unhyeon Palace, which gave a prototype to refer to when restoring the pattern, texture and color of the muryeomja. 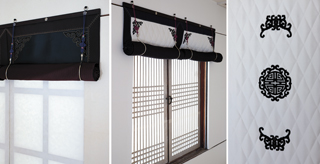 New muryeomja, or traditional curtains, are hung on the windows. [JEON HO-SUNG]

The separate rooms for the king and queen have differing atmospheres, which is rendered by two different styles of muryeomja. The restoration of the east room was directed by Kim Jeong-a, and that of the west room was led by Yoo.

Yoo recently displayed her restored attire for King Cheoljong (1831-64) at an exhibition at the Seokjuseon Memorial Museum of Dankook University in Yongin, Gyeonggi.

“The ambience of traditional quilting depends on how many stitches made within 1 centimeter [0.4 inches],” Yoo said. “I pondered for a long time how many stitches should be arranged and how long one stitch should be in order to show the dignity of the royal family.”

The center of the muryeomja features patterns of Chinese characters and dragons, while the edge has a bat pattern. But it was not an easy job. It was a difficult feat since unlike applique, the traditional way of quilting is to cut the pattern and stitch it directly onto the curtain. Thus, the thickness and the color of the thread are key elements in the design.

The patterns were made out of black winceyette, a kind of cotton flannel. As there was no fabric of the desired texture, the team dyed white winceyette black. Also, the thread was hand-made by researcher Kim Jeong-a.

“I have used the ready-made thread to produce the desired images but all were just not enough,” she said. “So I had to make my own - coiling the thin threads over and over again - and constantly checking if the excellent quality was being created.”

Master Hong Seong-hyo built the wooden frame that holds muryeomja from the top. Even though it seems a general-purpose frame, it is sophisticatedly made. Since muryeomja is heavy with the quilted silk and the cotton, the frame can easily become crooked. Hence, he meticulously calculated the length and the thickness needed to withstand the weight.

On the wooden frame, stones in the shape of small flowers were added as decoration. The research team had to meet over five times to decide the thickness of the stones and the shape of the flowers. They needed to be in a perfect balance with the muryeomja.

Master Kim Eun-young worked on creating the rope loops to hold the curtain. She also dyed the thread herself and coiled several threads to produce the perfect thickness and the color for the rope.

“The key characteristic of Korean traditional knots is the beauty created from the exact symmetry. The pattern seen from any angle should look exactly the same. The thread is essential as well to complete the beautiful look,” Kim explained.

In order to make one 60-centimeter rope, she has to coil threads that are three or four times longer. The thicker the thread is, the more strength she has to use. So during the Joseon Dynasty, masters of knotting were commonly men.

From left: Master Hong Jong-jin made the flower-print wallpaper, or neunghwaji; Master Kim Eun-young makes thread for use on the curtains; Masters Hong Seong-hyo and Kim Jeong-a discuss the wooden frames used for the curtains; And master Yoo Seon-hi designed the muryeomja for the west room where the queen once slept. [JEON HO-SUNG]

After the project began last fall, it took a month for the wallpaper and the linoleum on the floor to dry. The muryeomja was ready in early December, and on Dec. 16 it was hung on the windows of the Hamnyeong building. A cold wind was blowing that day, but the room became cozy.

Some might think that the restoration of muryeomja and other traditional interior items is not a big deal. However, the restoration of cultural heritage is like a race against time. Finding the right thickness for threads and stitches and so on required a lot of trial and error. The decisions should be based on historical evidence so that they can reflect the culture of the period.

Furthermore, some might be disappointed in the results of the project. The Hamnyeong building still looks relatively empty and deserted, and unfortunately the room was only open to the public for a short time.

However, in order to make it a permanent display, constant management and a high level of investment are necessary. Plus, an agreement over restoring and preserving cultural heritage is needed.

For example, fabric rots in the humidity. To maintain the optimal temperature and humidity, ondol, or floor heating, should be used, using modern technology. But people cannot agree on whether this technology should be installed or whether the buildings should be preserved.

Fortunately, the projects will continue. The next goal is to recreate the wooden items used in the Seokeodang building of Deoksu Palace. Even though it will take a while, it will pay off once Seoul’s palaces are beautifully restored.