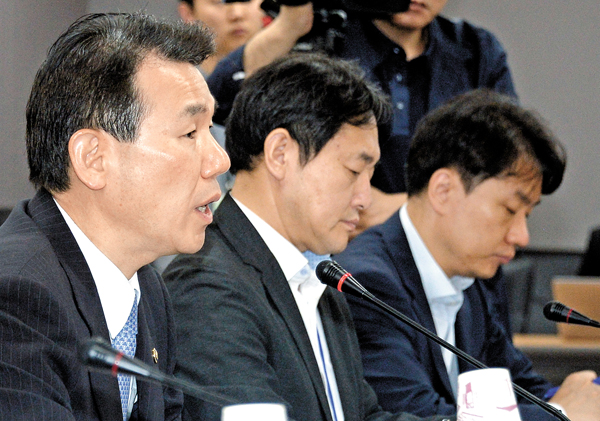 Jeong Eun-bo, vice chairman of the Financial Services Commission, left, speaks about the results of the regular market classification adjustment by Morgan Stanley Capital Investment (MSCI) at a meeting in the Central Government Complex, central Seoul, on Wednesday. Jeong reported that Korea was not included in MSCI’s list of developed markets, according to the market index, and that it would be difficult for Korea to be included in the list in the near future. [NEWSIS]

“The MSCI Korea Index will not be included on the list for a potential reclassification to Developed Markets status as part of the 2017 Review because the recent changes announced by the Financial Services Commission [FSC] in South Korea will not take effect until 2017,” MSCI said in a statement on Tuesday, “and the investment frictions related to the lack of convertibility of the Korean won and restrictions imposed by the local stock exchange on the use of exchange data for the creation of financial products remain unaddressed.”

Asia’s fourth-largest economy has been trying for the past two years to get the nation’s stock market relisted on the watch lists, which will give it a chance to move up to advanced market status next year. Korea, which has been on the MSCI’s emerging market index since 2009, was taken off the reclassification list in 2014 on the grounds that it lacked “meaningful developments” on its around-the-clock Korean won exchange in recent years and has high barriers against foreign investors.

The upgrade to the developed economy index was expected to raise Korea’s appeal to foreign investors who can invest long term and help advance Korea’s financial market.

The Korean government even made a last-minute pitch to MSCI’s office in Hong Kong, in an effort to demonstrate improvements it has made, including financial overhauls. An additional attempt to make the MSCI watch list seems unlikely, as the Korean government made it clear that it has no plan of rushing the issue.

“We are not going to cling to short-term results,” FSC Vice Chairman Jeong Eun-bo said on Wednesday. “We will continue to work on advancing our market’s infrastructure while focusing on raising the attractiveness of our [Korean companies]” as potential investment opportunities.

The vice chairman said for now it seems difficult to move from emerging market status on the MSCI index.

“My understanding is that [the MSCI decision this time] is an expression [on their stance] that to be included on the watch list, [they want] concrete execution [of reforms] that foreign investors can actually feel,” he said.

In a statement released on Wednesday, the FSC said the direction of the Korean stock market shouldn’t be determined on the investment capital that simply follows certain indices. Rather it should be determined by Korean companies’ attractiveness as investment opportunities and its growth potential. This is a mood shift from the commission’s earlier aggressive approach to make the index.

In fact, the government stressed that it doesn’t intend to open the foreign currency market, especially considering the country’s unique export-reliant economic structure.

MSCI has repeatedly demanded that Korea open to offshore foreign exchange markets so that foreign investors can easily convert their currencies to won, even after the market is closed.

“Ours is a small open economy whose trade contribution is high,” Jeong said. “Because of its uniqueness, foreign exchange market stability is important.