After a major victory, awkwardness ensues

After a major victory, awkwardness ensues 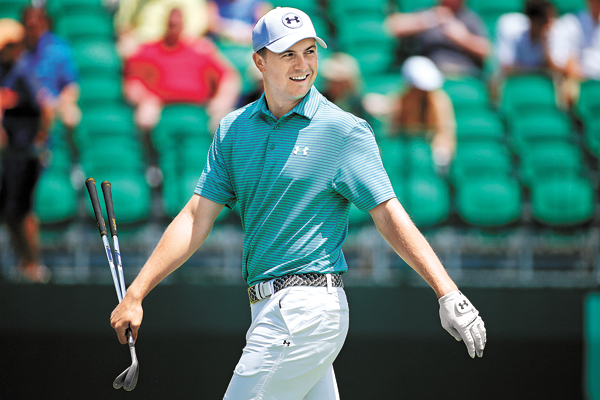 Defending U.S. Open Champion Jordan Spieth of the United States smiles as he goes through a practice round on Tuesday for the 2016 US Open golf championship at Oakmont Country Club in Oakmont, Pennsylvania. [AP/NEWSIS]

OAKMONT, Pa. - Jordan Spieth talks to his golf ball, to his caddie and even to himself when no one is around to listen.

This was one time he couldn’t think of anything to say.

And he had just won the U.S. Open.

Spieth was in the scoring area watching the finish to Chambers Bay, hopeful of a playoff, concerned that Dustin Johnson could win with a 12-foot eagle putt. Instead, Johnson three-putted for par. Before the shock could even begin to set in, Spieth walked out the door and ran into Johnson.

The joy was temporarily muted.

“I didn’t know what to say,” Spieth said. “He was just, ‘Hey, great playing, really happy for you,’ and just went in to sign his card. And I know Dustin really well. I really enjoy spending time with him and playing golf with him. I don’t remember what I said to him. I think I said, ‘Thank you’ at that point.”

There is no greater thrill than winning a major.

But there are times when the elation is tempered when standing next to a runner-up who lost in part because of his own memorable failure.

Spieth knows both sides of it.

This year at Augusta National, he lost a five-shot lead on the back nine in his bid for a second straight Masters. Worse yet, as the defending champion he had to present Danny Willett with a green jacket that he felt should have been his.

“He literally just got finished, signed his scorecard and whisked straight out,” Willett said. “It’s a tricky one. It’s a tricky one for him to take, but he handled it fantastic. He handled it as good as what you can expect anyone to do in that situation.”

And it was tricky for Willett, too.

He said to Spieth at the trophy presentation, “I feel very fortunate to be standing here, and you not putting the jacket on yourself again.”

“You try to be relatively humble realizing what just happened in the hope that, if it was a role reversal, you’d get the same thing back,” Willett said Tuesday. “And we’re all trying to win at the end of the day. And unfortunately, it’s a game where only one person can win at the end of the week. That week was my week to do it.

“You try not to be too overjoyed by the situation with him standing right there next to you.”

Stewart Cink had as difficult a chore as any major champion, mainly because he beat 59-year-old Tom Watson at Turnberry. He began clapping when Watson came out for the trophy presentation, and even as Cink cradled the silver jug, he looked over at Watson and said, “He turned back the clock, just did a great job. I speak for all the rest of the people here, too.”

And when it’s a friend? It gets even tougher.

Ernie Els won the British Open at Royal Lytham & St. Annes in 2012, a victory no one saw coming, including the Big Easy. But the birdie putt on the last hole turned into a winner when Adam Scott, leading by four shots with four holes left, closed with four straight bogeys to lose by one.

Phil Mickelson has been there, too, especially in a U.S. Open.

Of his six runner-up finishes, none was more memorable than Winged Foot in 2006, when Mickelson had a one-shot lead playing the 18th hole and hit his drive off a corporate tent, clipped a tree, caught a plugged lie in a bunker and made double bogey to finish one shot behind Geoff Ogilvy.

And then it was off to the trophy presentation, and what Ogilvy described as an “odd feeling.”

“Because it was five minutes after Phil signs his card that they do the presentation, and I’m standing next to him on the green,” Ogilvy said. “It’s a weird situation. You’re completely elated, but you’re demoralized for him because you know how he’s feeling.”

Ogilvy never felt like an undeserving champion. Neither did Els, Spieth or even Ben Curtis when he won the British Open after Thomas Bjorn took three shots to get out of a bunker.

“It doesn’t tarnish the moment,” Ogilvy said. “It adds a different element to it. Is there a word for it? Awkward? Empathetic? You’re not gleeful in front of him. Because he feels as bad as you feel good.”