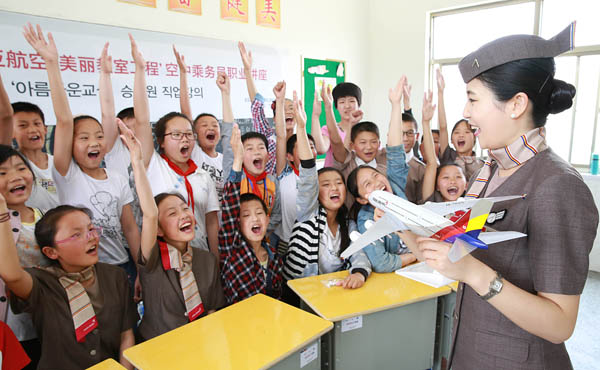 An Asiana Airlines cabin crew member explains how an airplane works as part of the carrier’s “Beautiful Classroom” project at an elementary school in Jiangsu province, China, on Tuesday. [ASIANA AIRLINES]

Asiana Airlines, one of the nation’s two major airlines, established a partnership with an elementary school in Jiangsu province, eastern China, to further the company’s “Beautiful Classroom” social service project, the company said on Wednesday.

The airline began the project as part of its corporate social responsibility program in 2012, aiming to improve the educational environment for low-income students in China.

For this round, Asiana Airlines provided eight computers, 400 desks and chairs and 1,000 books. A lecture by the airline’s crew members was also offered to bridge children’s dreams and their reality.

“We will strengthen diplomatic ties between Korea and China through continuous social contributions to the global market including the local community in China,” the company said in a statement.

Over the years, the company has inked partnerships with 25 schools across China as part of the Beautiful Classroom project in regions including Changchun, Dalian, Nanjing and Xi’an.

Through the annual operation of classrooms, the company has donated education supplies worth 1 billion won ($850,000). Last year, the company was recognized by the Korean Embassy in China for its annual contributions to the Chinese community.