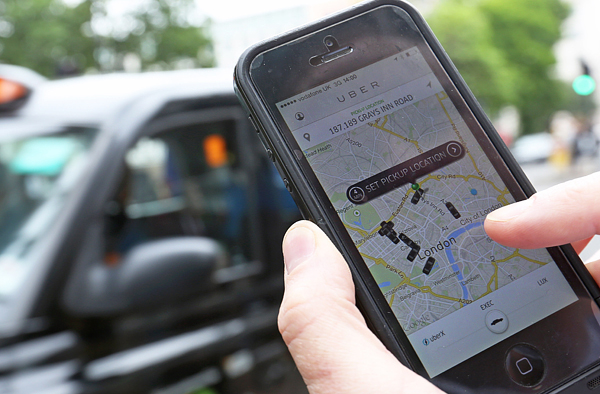 A user hails a taxi on the Uber app. [BLOOMBERG]

“The seminar will have participants from the automotive and IT industries and is not exclusively for Uber researchers,” a Hyundai spokesman said.

Hyundai has been increasing its efforts to develop self-driving technology, with the aim of unveiling a fully autonomous car in the next four years. Its premium Genesis G80 sedan, scheduled for release before 2020, is considered the most likely model to feature the technology.

In March, Hyundai earned approval from the Ministry of Land, Infrastructure and Transport to deploy unmanned vehicles on the road for test drives.

After fundamentally transforming the taxi industry, Uber is seeking to upgrade its service with driverless fleets. The move would allow Uber, already Silicon Valley’s most valuable start-up, to save on the commissions that currently go to human drivers and ramp up profits.

Many tech giants and automakers are currently developing self-driving technologies, including Google. They believe the developments will make automobile accidents less frequent.

Since Uber does not build its own cars, it needs to source the vehicles from manufacturers like Hyundai.

Germany’s Manager Magazin reported in March that Uber had placed an order for at least 100,000 Mercedes S-Class cars powered by semi-autonomous technology, citing sources at both companies. Neither company officially confirmed the report.

The researchers’ visit to the Hyundai center comes less than a month after Uber and Toyota signed a memorandum of understanding “to explore collaboration, starting with trials, in the world of ridesharing in countries where ridesharing is expanding.”

They also vowed to work together on “sharing knowledge and accelerating their respective research efforts,” which could potentially include autonomous driving technology.

The partnership between Uber and Hyundai Motor Group dates back to last November, when the automaker agreed to supply Uber with sister company Kia Motors’ large-size K9 sedans for its premium Uber Black service that started earlier this year.

Uber has not been able to operate its normal service in Korea due to various regulatory hurdles.

Uber’s move comes at a critical time when its rivals have been rushing to join forces with global automakers. General Motors in January announced it was investing $500 million in Lyft and creating a partnership that will allow the 4-year-old start-up to use General Motors’ driverless cars.

Uber’s first self-driving car - a modified Ford - was initially tested in May 2015.