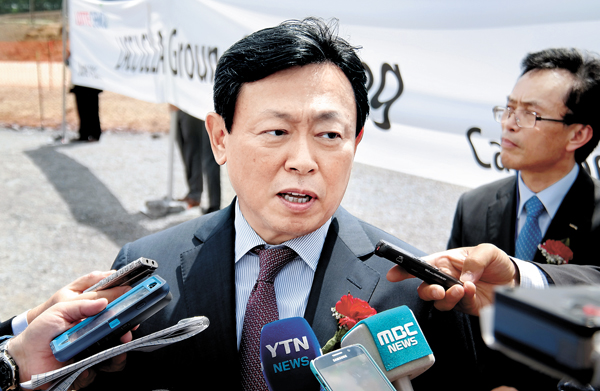 Lotte Group Chairman Shin Dong-bin answers questions from reporters at a groundbreaking ceremony of a new joint ethane cracker complex with Axiall in Lake Charles, Louisiana, on Tuesday about the intensifying investigation against his group for business malpractices and lobbying. He apologized and added that he will try to list Hotel Lotte in the Korean market by the end of this year. [LEE SANG-RYEOL]

“I apologize for causing all the trouble, and I feel responsible for it,” Shin said at the groundbreaking of a joint chemical complex with Axiall in Lake Charles, Louisiana, on Tuesday, where he met with correspondents.

“I will cooperate as much as I can with the prosecutors’ investigation.”

Shin’s appearance came four days after the start of an investigation into whether the group has carried out improper business transactions within affiliates and illegally lobbied government figures for favors.

The widening investigation and a rekindled battle over management control between Shin Dong-bin and his older brother Shin Dong-joo caused Lotte to call off a planned public listing of Hotel Lotte, the keystone in a reorganization of the group, which was once scheduled for this month. It was billed as the largest initial public offering (IPO) ever in Korea.

Shin Dong-bin said Tuesday that he was determined to go through with the IPO at some point in the future.

“We are not indefinitely postponing Hotel Lotte’s IPO,” he said. “I will try to make it by the end of this year. It is something I promised the nation.”

The high-profile government investigation, which is already producing serious allegations about corporate misdeeds, has revived questions of whether Shin Dong-joo, the ousted leader of Lotte Holdings, the de facto holding company of the group’s Japanese business, could wrest back control at the board meeting scheduled for later this month in Japan.

Shin Dong-joo posted a statement on Friday on his personal company’s Japanese website questioning his brother’s leadership and citing the ongoing prosecution probe.

If Shin Dong-joo can win over an association of employee shareholders that holds the second-largest chunk of shares in Lotte Holdings, or 27.8 percent, he has a slim chance of regaining control of Lotte Holdings.

However, Shin Dong-bin said in the United States on Tuesday that he “is not worried at all about the board meeting results.”

The cancellation of Hotel Lotte’s IPO is only one consequence of the recent crisis.

With prosecutors expanding the depth and breadth of the investigation into the nation’s fifth-largest group, raiding some 17 locations on Friday followed by another round of search-and-seizures on Tuesday, Lotte Group is shelving some key mergers and acquisitions planned for this year to expand their foreign business.

According to industry sources, Lotte Group recently canceled a plan to acquire a large duty-free shop based in the United States. It was the group’s Plan B to make up for its recent loss of a license to run its tax-exempt shop at the Lotte World Tower in Jamsil-dong, southeastern Seoul.

“We decided to forego the plan of acquiring some large-scale U.S.-based duty-free shops, considering the current situation,” a Lotte Group spokeswoman said. “The canceled IPO of Hotel Lotte has affected several mergers and acquisitions planned for this year.”

The group’s hotel business was planning to set foot in the U.S. market by acquiring U.S.-based hotel franchises, but that has also been scrapped, according to the spokeswoman.

Right after the raids on Friday, Lotte Group withdrew a plan to acquire U.S. chemical company Axiall, its partner in the Louisiana plant, a key ambition by Lotte Chemical to enhance its presence in overseas markets.

Since the Friday raids, shares of Lotte affiliates have been hit hard.

On Monday and Tuesday, the loss amounted to 1.6 trillion won, or 6.3 percent. All nine affiliates managed to edge up on Wednesday.

Still, analysts note that the probe will continue to drag down shares of Lotte affiliates.

“As the investigation widens, the IPO of Hotel Lotte will be significantly delayed,” said Yang Ji-hye, an analyst at Meritz Securities. “That would lower expectations of Lotte’s efforts to improve its corporate governance.”

Lotte Group said in a statement on Wednesday that Shin Dong-bin will stay in the United States for a while longer before he attends the Lotte Holdings board meeting in Japan.

After the board meeting, Shin Dong-bin will return to Korea.

The IPO aimed to raise up to 5.3 trillion won and reduce holdings by Japanese units from over 90 percent to the 60 percent range.