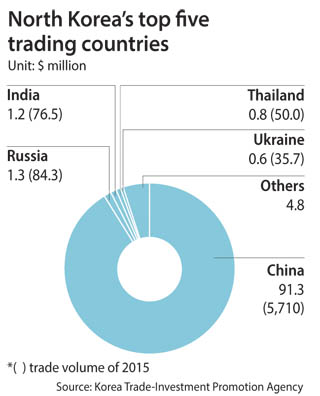 Trade between South and North Korea is excluded from the statistics, as the research was based on the North’s trade with foreign countries.

“The biggest hit was from the sluggish Chinese economy since North Korea is still very dependent on China in terms of trade,” said Park Jong-pyo, an analyst at Kotra. “Also, last year’s price fall of oil and natural resources, which are major export items for North Korea, played a big part in trade declines.”

Trade with its largest partner China fell 16 percent to $5.71 billion in 2015 as North Korea’s major export items such as iron ore were oversupplied in the mainland. Because of excessive steel supplies in China, iron ore exports from North Korea declined 45.5 percent on year.

The fall in international oil and coal prices added to the slump. Coal exports to China increased 26.9 percent from the previous year, but the trade volume in terms of price declined 7.6 percent as the production cost of coal plummeted.

Economic sanctions from the United Nations Security Council have yet to show an impact on the country but will mostly be shown in 2016’s trade results rather than last year’s.

Under the international sanctions, Pyongyang’s seven key exports have been banned from being shipped out following the regime’s fourth nuclear test and launch of a long-range rocket in January. The North also cannot import aircraft fuel that might be used for military purposes.

“The impact is not yet very visible but the most notable change in North Korea’s trade relationships is that the country no longer trades with Japan,” Park said. “In the early 2000s trade volume between the North and Japan once reached 1.2 billion won, but from around 2010, there has been no trading at all.”