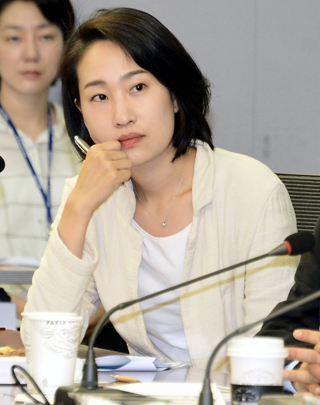 The People’s Party formally declared Wednesday the party’s innocence over a political funding scandal involving its young lawmaker, announcing the outcome of its internal investigation of Rep. Kim Su-min and her alleged irregularities.

The integrity of the newly emerged political party of Ahn Cheol-soo was challenged after Rep. Kim, the youngest member of the National Assembly and the founder of the start-up design company Brand Hotel, was marred in a corruption scandal.

At the request of the National Election Commission, the prosecution launched a probe last week into Kim on charges of receiving some 238 million won ($202,674) in kickbacks from advertisement companies during the April 13 general elections.

Kim, a 29-year-old proportional representative, was in charge of public relations during the campaign, and Brand Hotel was suspected of receiving kickbacks from a printing firm and a broadcast marketing company.

Suspicions also developed over the legitimacy of her nomination process.

Although the prosecution is still conducting its investigation, the People’s Party launched an internal probe on Monday and held a press conference Wednesday to announce preliminary findings.

The announcement still failed to answer many questions, although Rep. Lee Sang-don, head of the investigation team, tried to salvage the image of the party, which won 38 seats in the April general election based on its pledge of a new way of doing politics.

“As far as we know, the alleged kickbacks didn’t leave the company,” Lee said. “It’s sitting there. We confirmed it with bank account records.”

Lee said the money that Brand Hotel received is still in two bank accounts of the firm. “The money didn’t even move,” he said, adding that no one from the party ever received it.

“We concluded that it is groundless to claim kickbacks were given to People’s Party officials,” Lee said.

Lee, however, admitted that his team didn’t have the full investigative authority to obtain the entire transaction history of the Brand Hotel.

But he said the businesses involved in the scandal were founded by young entrepreneurs who would not engage in an ambitious conspiracy.

He also admitted that the team had not even talked to Kim and other senior party officials involved in the scandal.

The National Election Commission asked the prosecution to investigate Kim as well as Wang Ju-hyeon, former secretary general of the People’s Party, and Rep. Park Sun-sook, a veteran politician and the top campaign manager.

“We plan to interview them,” Lee said, “but it is up to them to provide testimonies. We cannot force them.”

Lee refused to comment on the fact that the team has no authority to investigate whether the party’s leadership, including Park, made any attempts to pocket the kickbacks.

Lee also said the team did not investigate suspicions over Kim’s nomination.

“She was nominated strategically and we have no judgement over the process,” he said.

The People’s Party announced on March 23 that Kim will be seventh on its list, although she did not apply for candidacy.

The People’s Party produced 13 proportional representatives including Kim at the April 13 election. Sources of the party said its leadership, including co-chairman Ahn, made a strategic decision to name her in a rush without a proper vetting, despite regulations.

The Seoul Western District Prosecutors’ Office summoned Wang Tuesday to attend a questioning Wednesday morning, but she did not show up, demanding more time to consult her lawyer.

Wang was the first People’s Party official to be summoned after the probe started on June 9.

Kim made another plea to the press for her innocence. “I want to say clearly that I didn’t pay money for the nomination,” she said Wednesday. “And there were also no kickbacks.”