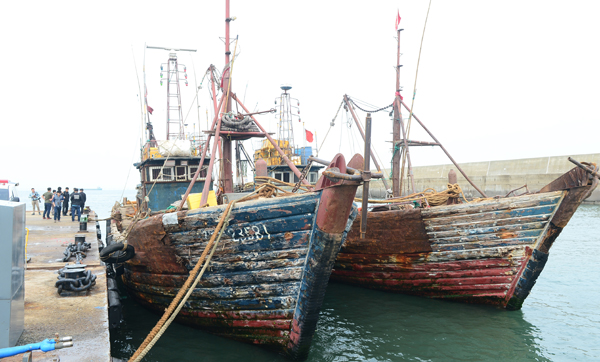 The two 35-ton boats were trespassing 1.4 kilometers (0.86 mile) into the inter-Korean neutral area at the Han River estuary when agents approached to seize them. The Chinese sailors violently resisted, hurling fishing gear at the military police.

Investigations revealed that these Chinese boats had embarked from Liaoning, China, in early April. The intruders had been fishing illegally ever since, violating not only the neutral Han River estuary, but also the South Korean territorial sea near the Northern Limit Line of the Yellow Sea. The Chinese sailors were able to stay at sea for so long because they made regular transactions with other cargo ships, selling portions of their catch in order to buy necessary supplies.

These fishermen also proved to be elusive, fleeing to North Korean territorial waters during the day and sneaking back in the dark of the night, essentially playing hide-and-seek with military police. To counter this, agents used high-speed boats.

A military spokesperson said, “We gave them many chances, but they kept coming back after we let them go. They were asking to be seized. If these illegal activities continue, we will be forced to seize even more boats.”

This came after a joint crackdown operation was launched last Friday by the UN Command Military Armistice Commission (Uncmac), the Korean Navy, the Korean Marine Corps and the Korea Coast Guard (KCG).

Seoul sought Uncmac’s help since it oversees the neutral zone at the Han River estuary, and the two Koreas are reluctant to approach this sensitive area due to the possibility of military conflict. As such, joint forces fly UN colors and are named “military police” to be distinguished from proper military units.

More and more Chinese interlopers are encroaching on Korean aquatic resources. From 2011 to last year, the KCG seized 2,397 Chinese boats, as well as 734-tons of catch from 335 boats. From January to May this year, 106 boats were seized, along with 5.7-tons of catch from 17 boats.