Eco-friendly towns are profitable for residents

Eco-friendly towns are profitable for residents 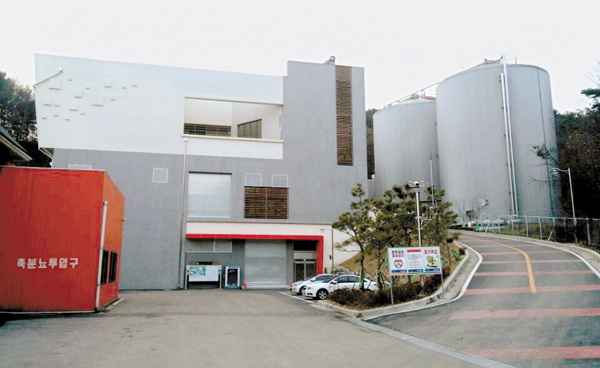 Livestock and food waste resource facilities at the Eco-friendly Energy Town in Hongcheon County, Gangwon. Waste and pollutants are processed into a maximum of 3,500 cubic meters of biogas on an average day. [HONGCHEON COUNTY]

The village of Somaegok in Hongcheon County, Gangwon, was often ridiculed as a “dung factory” due to the stench emanating from nearby municipal sewage treatment plants processsing human and livestock excrement.

“The first rule here is that you don’t open the window,” said Ji Jin-soo, the 40-year-old village leader. “It smells so bad that you just don’t dare to.”

The community’s long-time wish to throw off its nickname was finally granted when the village was transformed into an Eco-friendly Energy Town in December last year. Its pollutants and by-products of sewage treatment are now converted into biogas energy like methane and fertilizer for use by local farms.

On average, 100-tons of excrement and food wastes are processed into 3,000 cubic meters (105,944 cubic feet) of biogas each day, which is then refined into 2,000 cubic meters of liquefied natural gas (LNG) to be sent to households.

An additional solar power plant installed within the water treatment facility in Somaegok-ri produces 1,166 kilowatts of power daily. The 58-million won ($49,360) annual proceeds are then deposited into the community’s joint bank account.

Other Eco-friendly Energy Towns are being developed across the country. Facilities considered undesirable, such as sewage or water treatment plants, are turned into energy producers so that residents can benefit from the recovered supply of gas and waste heat.

In 2014, three areas were selected for such developments and 10 additional sites were chosen last year. The Ministry of Environment and the Ministry of Trade, Industry and Energy said on Monday that six more areas were designated for the program this year, namely Eumseong County in North Chungcheong, Boryeong and Seosan in South Chungcheong, Inje County in Gangwon, Wanju County in North Jeolla and Hallim-eup in Jeju.

An environmentally-friendly livestock waste treatment plant will be constructed at Wondang-ri in Eumseong County. The region is packed with cattle and swine farms, resulting in the daily production of 130-tons of animal waste. This waste will be turned into biogas to generate power and the heat from the process will be piped into a nearby 2,000-square-meter (21,527-square-foot) village greenhouse. Management of the greenhouse will be handed over to neighborhood residents.

Kim Ik-hwan, the 51-year-old village leader, said, “We can raise more specialty crops such as watermelons, strawberries and oriental melons in that greenhouse. We’re also planning to rent the greenhouse to floriculturists to increase the village’s income.”

Another 230-ton capacity livestock waste treatment plant will be built in Hallim-eup, Jeju.

In Inje, the county’s 38-ton capacity solid waste incinerator facility will be expanded to 78 tons, and a food waste processing plant will be built on the premises for fertilizer production. The resulting heat will be used by a public seed nursery and grain dryer before being sent to lodging houses for heating in order to assist the tourism sector.

The city of Boryeong will build a solid refuse fuel facility producing 50-tons of fuel that will be sold to thermal power stations, creating an annual income of 900-million won for residents of nearby villages.

On top of this, solar and wind-powered heating will be provided for the residents of Ungdo-ri in Seosan. The facilities to be constructed in the area will also produce 107 kilowatts of power per day.

Baek Dong-seob, a deputy director at the Ministry of Environment, said, “We’re hitting two birds with one stone by building these Eco-friendly Energy Towns. We’re not only finding new uses for waste materials but also producing more power at a lower cost. We expect to continue development in the future.”