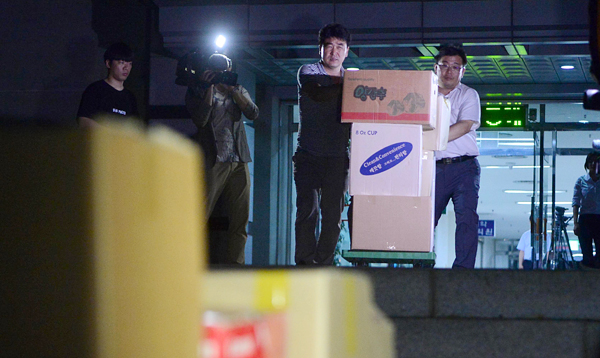 Lotte Group may have led to an outflow of wealth to Japan at the expense of affiliates here in Korea thanks to its improper business conduct over the years, prosecutors now suspect.

The new finding came as prosecutors investigated how Hotel Lotte, the de facto holding company of Korea-based Lotte affiliates, made profits from its mergers and acquisitions in a questionable manner at the expense of Korean affiliates. Hotel Lotte is owned by Japanese affiliates, including Lotte Holdings, Kojyunsya and 11 subunits of L Investment.

One case in point is Hotel Lotte’s mergers with Hotel Lotte Jeju and Lotte Buyeo Resort in 2013. The Seoul Central District Prosecutors’ Office said Wednesday that it raided the two resorts, and the accounting firm Deloitte Anjin, which carried out the valuation of assets for 2013 mergers, one day before.

Prosecutors suspect Hotel Lotte acquired the two resorts for much less than their market value.

Based on Anjin’s valuations, the swap ratio was 1 to 0.023 per share for Buyeo resort and less than 1 to 0.004 per share for the Jeju resort.

Prosecutors are now investigating possible charges of professional negligence and are tracking the flow of Hotel Lotte’s profits from the mergers.

Suspicions concerning the possible outflow of wealth to Japan stem from the fact that Hotel Lotte is controlled by Lotte’s affiliates in Japan.

The 11 subunits of L Investments are owned by either Lotte Holdings or Lotte Strategic Investment, both based in Japan.

The ownership structure of Hotel Lotte indicates that as more revenue is generated by Hotel Lotte doing business in Korea, more profits are channeled into affiliates in Japan and their Japanese shareholders.

Between 2011 and 2015, Hotel Lotte provided a total of 120.4 billion won ($102 million) to Japanese affiliates in dividends, adding to the suspicion of the outflow of national wealth.

Investigators are expected to focus their probe on whether Lotte executives carried out mergers and acquisitions improperly in order to bring inappropriate gains to Hotel Lotte.

“It is true that at the top of Lotte ownership are its Japanese affiliates,” said a prosecutor involved in the investigation, speaking on the condition of anonymity, “And they hold control its companies in Korea.”