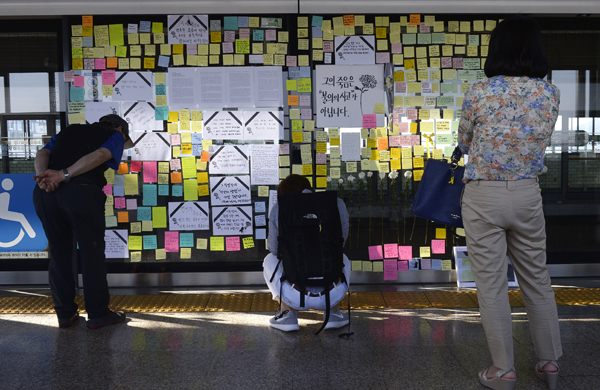 Passengers pay tribute to the 19-year-old mechanic whose life was brutally cut short by a tragic accident while working on a platform door at Guui Station in northeastern Seoul. [OH SANG-MIN]

It has been a few weeks now, but the accident at Guui Station in northeastern Seoul that took the life of a repairman still haunts Korean society.

Controversy over the tragedy is spreading and politicians are having political debates, but people are responding more sensitively and intensely over the Guui Station accident compared to other similar cases. Before the incident, there had been deaths of repairmen while working on the screen doors at Seongsu Station in 2013 and Gangnam Station in 2015.

The Guui Station accident once again revealed the nation’s shameful insensitivity to safety.

The incident garners especially great attention because it not only exposed issues of safety but also revealed other structural problems. The key elements of the Guui Station accident are a 19-year-old victim, contract employment and instant noodles.

These three things represent the pains that many young Koreans living today must endure. Young people have a hard time finding a decent job even with good qualifications. Regular employment is hard to find, and contract workers are discriminated against.

People live day by day and cannot find hope for the future. The Guui Station accident symbolically reveals the bare face of “Hell Joseon.” Many young people visited the scene, dedicated flowers and left a note because they saw their own struggles reflected in Kim’s death.
Interestingly, the young generation today is in a difficult situation but is politically more quiet and docile than any other generation before them. The young people in the 1960s led the April 19 Revolution, and the young people in the 1970s fought against the Yushin (October Restoration) system.

Social phenomena have certain rules because specific sets of political and social conditions often lead to corresponding incidents and tendencies. The young generation’s collective rage will have to be expressed in some way.

A few years ago, the Occupy Wall Street movement opposed economic polarization in the United States, but it did not last long. But the same structural causes that inspired the movement made a young generation express their feelings by supporting Senator Bernie Sanders of the Democratic Party. Some low-income white Americans are venting by supporting Donald Trump.

The intense sympathy and responses of the young generation toward the Guui Station tragedy shows that the anger of Koreans in their 20s and 30s toward the irrationality of the current situation has reached a boiling point.

So how should we interpret the political silence of the young generation? In the 1970s, Western democratic countries went through political changes led by the young. They emphasized new values that did not exist in the past such as environmentalism, pacifism and feminism, and it changed the existing political party structure, bringing about the emergence of the Green Party. But the movement did not accompany a radical change comparable to the French Revolution or Russian Revolution.

Political scientist Ronald Inglehart calls it a “silent revolution.” While a society may seem quiet from the outside, it is often going through critical political revolutions within.

We cannot assume the anger and frustration of young people will remain quiet forever. Perhaps it will not take the form of a radical and intense struggle like those of the past, but dissatisfaction and demands will ultimately be expressed in the political process.
Young voters have already shown a different attitude in this year’s general election. The turnout rate of young voters went up, and they actually helped bring about a multi-party structure.

In next year’s presidential election, a candidate who can address the suffering and frustrations of the young, as symbolized by a 19-year-old worker and instant noodles, is likely to be elected.

With the presidential election approaching, the silent revolution of the young has already begun.