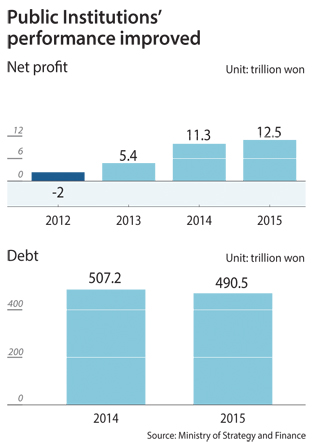 Performance by the 116 public institutions improved in 2015 compared to the previous year, the government said.

According to the Ministry of Strategy and Finance, 20 institutions received an A-grade on the assessments, and the number of those receiving the highest marks rose by five compared to the previous year. The number of B-graded firms grew by two to 53.

The government will warn heads of institutions that performed poorly last year, but said that it isn’t considering firing any of them since their term are already coming to an end.

“Public institutions performed better last year and their financial stability has improved, including their debt that dropped by 16.7 trillion won ($14.3 billion),” Yoo Il-ho, deputy prime minister for the economy and finance minister, said on Thursday. “The government will have outstanding firms to award performance bonuses to employees and will warn companies that did poor to improve their management.”

All of the public institutions have adopted the peak wage system, which delays the mandatory retirement age in return for lower wages in the final years of employment. The government said this will have a positive effect on the local labor market this year.

“We expect public institutions to hire the largest number of employees this year,” said Yoo. “The peak-wage system helped some of the firms to receive higher credit ratings as well. Public firms continuously need to take various measures such as adopting performance-based wage system to improve productivity.”

A total of 161 evaluators from private sectors, including professors, lawyers and accountants, reviewed each public institution’s performance for the past three months.