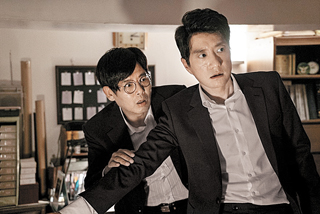 Pil-jae, played by Kim Myeong-min, is a well-known middleman who finds legal cases and passes them on to lawyers.

One day, a letter arrives from a prisoner on death row in which he appeals for his innocence. The prisoner has been accused of murdering the daughter-in-law of a chaebol family.

Pil-jae and his colleague, Pan-soo (played by Sung Dong-il), feel that this case is not an ordinary one and could put both of them in jeopardy. The seriousness of the case snowballs as time passes, and they cannot ignore the overwhelming pressure from the information in the letter. Finally, they decide to investigate the case in depth.

Considering only the story line, moviegoers could easily judge this film as a very serious one, but with the witty and vivacious characters, the overall atmosphere of the film is lightened up with humorous elements.

Especially veteran actors Kim and Sung will catch the attention of the audience by portraying a mesmerizing partnership on screen.

Sung is well-known for his humorous characters in various TV dramas such as the “Reply” series. Kim is also acclaimed for his broad acting career.

The film will make moviegoers laugh with satisfaction as the investigation progresses. 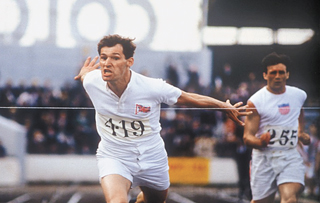 This masterpiece is being brought to screens across Korea for the first time 35 years after it was originally released in 1981.

The film is based on the real story of two athletes, Eric Liddell and Harold Abrahams. The two comparatively opposite characters are each working to achieve their goals. Liddell is a very pious Christian who is running due to his belief in God. On the other hand, Abrahams wants to fight against the harsh discrimination he has undergone as a Jew. So he wants to overcome prejudice by winning a gold medal.

Liddell and Abrahams are selected as the members of the English track team for the 1924 Olympics held in Paris. As they are rivals, they cannot escape the fate of competing against each other for the gold medal. The world’s attention is focused on their competition.

Ian Charleson plays the role of Liddell and Ben Cross plays Abrahams. At the time the film was made, there were many hurdles for the actors and director to overcome, since the newbie director, Hugh Hudson, portrayed the world of sports in a way that was not welcomed by many moviegoers. Also, as it was not a Hollywood blockbuster, people did not expect the film would gain much attention worldwide.

The two athletes’ passion and sportsmanship are highlighted through use of slow motion and stop motion shots. The dramatic effect created by these techniques led the film to join the ranks of best sports movies.

The World of Us (All)

Relationships are the most difficult part of life regardless of age. Director Yoon Ga-eun demonstrates this difficulty and the deep emotions involved through 11-year-old girls.

Lee Seon is an outcast at her school and she comes to meet Han Ji-ah, a transfer student, on the first day of summer break. They become the best of friends during the summer who even share their secrets. However, when new semester starts, Han acts differently toward Lee. Han wants to join another group of students after realizing that Lee is the least-favorite member of the class.

In this film, young actors dominate the screen, but the movie does not only address children but also adults. The ideas about relationships that are described in movie will bring back viewers’ memories of their youth, the time when they didn’t know how to protect their vulnerable relationships, when they don’t know what to do.

Director Yoon is famous for delivering emotions through children. Most of her movies’ main characters are young, but she successfully conveys a sense of emotion to the audience. To bring raw and natural acting to the screen, Yoon spent three months conversing with young actors so she could understand them better. The director said most of the lines were the ideas of the actors themselves.

“The World of Us” was invited to the 66th Berlin International Film Festival, and her short film “Sprout” (2013) was also invited to the festival previously. 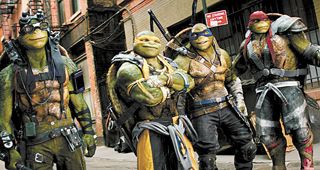 Teenage Mutant Ninja Turtles: Out of the Shadows (12)

The sequel of “Teenage Mutant Ninja Turtles” (2014) is inviting the moviegoers to experience a new round of battle with Shredder (Brian Tee).

Shredder has obtained a mysterious liquid that turns humans into animals. With this powerful poison, he is once again trying to conquer the world. He is recruiting criminals in order to form his own army. However, the four ninja turtles will never let him succeed in his plans.

Not only the ninjas but also the hot-blooded reporter April O’Neil (Megan Fox) is bent on saving the world. Extreme action scenes are guaranteed with these exciting and vigorous characters.

Since the film is based on the famous cartoon TV series “Teenage Mutant Ninja Turtles,” fans will have fun finding how the film portrays the tension in the heroes’ fight against the villain.

Moreover, the four different characters of the ninja turtles evoke eccentric chemistry as team mates. The leader of the group, Leonardo, wears blue bandana and is reticent. Raphael has a red bandana and is hot-tempered. Donatello is logical and smart, which is represented by the color purple. Finally, the youngest ninja turtle, Michelangelo, is care-free with an orange bandana. 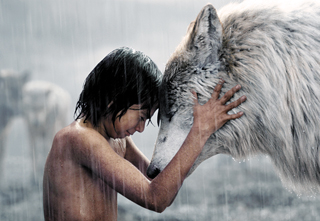 The director of “Iron Man” (2008), Jon Favreau, has revived one of the most famous Disney stories, “The Jungle Book,” with the “Pirates of Caribbean” production crew.

After Disney released “Zootpia” and “Captain America: Civil War” this with significant success, especially in Korea, “The Jungle Book” follows amid high expectations from the public.

“The Jungle Book” has already received attention because of the impressive lineup of cast members that includes Bill Murray, Ben Kingsley, Scarlett Johansson and Lupita Nyong’o.

Walt Disney Studios produced the animated feature film “Jungle Book” in 1967 based on the novel by Rudyard Kipling, and this time the studio is bringing the timeless adventure story to a live action film with computer-generated imagery.

A man cub, Mowgli, played by Neel Sethi, is raised by a wolf pack, but he has to leave the jungle because of the threat of Bengal tiger Shere Khan. Therefore, Mowgli starts a journey with his black panther guardian Bagheera and bear Baloo.

The film features stunning, lifelike visual of animals and nature that will satisfy even the most skeptical fans of the original.

Every vivid scene is breathtaking, and the film even maintains several of the original soundtrack songs from the 1967 version.

The film was released in North America in April and has become the third highest-grossing film of 2016, after “Captain America: Civil War” and “Zootopia.”