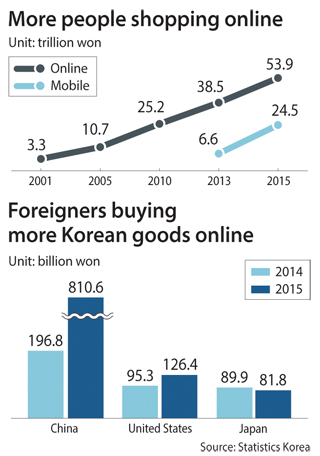 The size of the online shopping market in Korea has increased over 1,600 percent in the past 15 years, largely thanks to the increasing ubiquity of smartphones and larger number of foreigners purchasing Korean goods.

According to Statistics Korea on Thursday, online shopping transactions rose from 3.35 trillion won ($2.86 billion) in 2001 to 53.89 trillion won last year.

The size of the market has grown an average 22 percent each year.

Shopping via mobile devices surged from 6.56 trillion won to 24.46 trillion won during the same period, rising 93.1 percent over the past three years. That accounted for 45.4 percent of total online shopping as of the end of last year, up 28.4 percentage points from the 17 percent seen in 2013.

“More people are using high-speed internet and smartphones than in the past, possibly helping the online shopping market grow recently,” an official at Statistics Korea said.

In fact, the number of Koreans with high-speed internet rose from 17.9 million in 2011 to 20 million last month. The number of Koreans using smartphones also grew from 22.6 million to 43.7 million during the same period, according to Ministry of Science, ICT and Future Planning.

Clothes and fashion-related products; travel and reservation services; household goods; food products; and electronics were the five areas with the most online spending last year.

Online spending on travel and reservation services rose 4,551.1 percent in the past 15 years, while spending on clothes and other related goods grew by 4,714.3 percent.

“Retail sales are growing in general in Korea, but we expect that the share of online shopping will continue to increase,” Sohn said.

At retailers with both online and brick-and-mortar stores, spending rose from 2.26 trillion won to 41.85 trillion won during the same period, by an average 23.2 percent each year.

Chinese customers bought 810.6 billion won worth goods through online shopping in 2015, up 173.1 percent from the previous year.

Sales to the United States rose 32.6 percent to reach 126.4 billion won, while the figure for Japan dropped 9 percent to 81.8 billion won during the same period.

The figure for clothes and household goods rose 55.1 percent and 51.2 percent each during the same period.