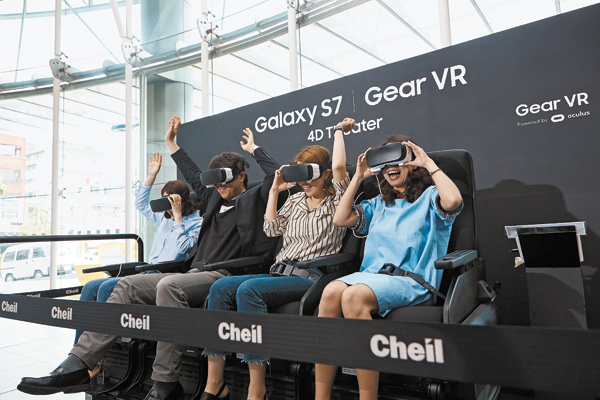 Employees of Cheil Worldwide, the advertising arm of Samsung Group, enjoy virtual reality content through Samsung Electronics’ VR Gear headset as part of a special 4D Theater installed on the rooftop of the company’s building in Hannam-dong, central Seoul, on Thursday. The theater, scheduled to remain operational until the end of this month, is a miniature version of the roller coaster-like machine shown in the headset and moves accordingly. Samsung Electronics has used the theater for various occasions such as the Consumer Electronics Show, Mobile World Congress and Galaxy S7 Unpacked events to promote its VR Gear headset. Cheil’s use of the facility is meant to promote its ability to use virtual reality as part of marketing promotions. [SAMSUNG GROUP]