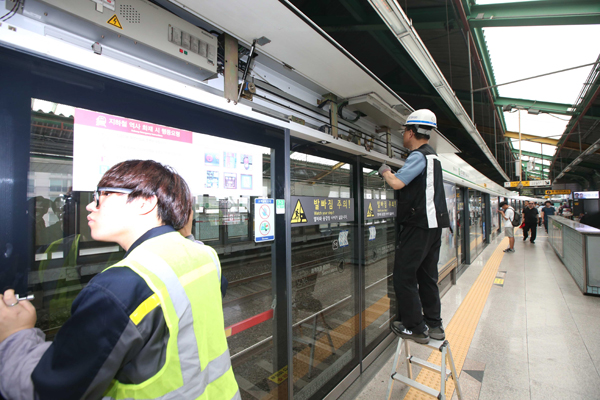 Park Hui-gun, left, a 19-year-old mechanic, and Kim Se-woong, 60, work on a platform door at the Guro Digital Complex Station in southwestern Seoul on Saturday. The teenage mechanic who was killed while fixing a platform door at Guui Station was also 19 years old and worked for Eunsung PSD. [OH JONG-TAEK]

It’s 1:30 p.m. on a Saturday. Two mechanics hurry to a malfunctioning platform door at Sillim Station in southern Seoul. Kim Se-woong, 60, doesn’t show his age as he athletically climbs a ladder and opens the platform door.

Passersby point at the workers’ vests and mutter. The vests bear logos for Eunsung PSD, the maintenance company that employed a 19-year-old mechanic who died on May 28 when he was hit by a train while fixing a platform door.

Some passersby stop and watch the two men doing the same job that killed the teen.

Within 10 minutes, Kim’s glasses are sliding down his nose and his hair sticks to his sweaty face. A Seoul Metro official and station officer stand behind them as they work.

More than two weeks have passed since the teenage mechanic’s tragic death at Guui Station in northeastern Seoul. Authorities found in his bag a cup of instant ramen - evidence that he had to work around the clock and had little time for a proper meal.

A public outcry over the accident snowballed when it was revealed that the teen’s company was forced to hire retired officials from Seoul Metro, many without real mechanic skills, forcing the regular mechanics to cover more shifts and put their lives at risk.

Yet Park Hui-gun, 19, and the 60-year-old Kim, both mechanics subcontracted to Seoul Metro, are still working around the clock.

“Sure, at least we get time to eat lunch now,” Park says. “But we are still out of breath most of the time, trying to get to all the stations before our shift ends.”

The JoongAng Ilbo tailed the two employees of Eunsung PSD during their nine-hour shift on Saturday. They covered eight stations. Mechanics are now strictly required to work in pairs - a stipulation that existed at the time of the Guui Station accident, but it was often ignored because of a shortage of workers and a requirement that repairs be completed within one hour of a maintenance call.

Since the death of the teenage mechanic, the latter regulation has been scrapped.

“It’s nicer to work in pairs,” Park says. “But now we have to call a Seoul Metro official every time we arrive at a station and wait for them [to get a master key to open up a platform door], so we’re still out of time.”

“Working in pairs does not solve everything,” says another Eunsung PSD mechanic. “You still have to get to the other side of the platform door to fix the sensors.”

He was talking about so-called area sensors, which are installed on the railroad-side of platform doors to detect movements and report on any irregularities. The teenage mechanic killed at Guui Station was fixing an area sensor when he was hit by an incoming train.

“We need to change all sensors to laser-style sensors, which can be installed on the outer side of platform doors,” Kim says.

Running from station to station that day, the two mechanics arrived back in their office at 4:50 p.m., 50 minutes past their shift’s formal close.

Public efforts to guarantee the safety of these workers continue.

In his second address on the Guui Station accident, Seoul Mayor Park promised to root out corruption in Seoul Metro, and to have all platform door repairs and other maintenance work of the company be directly managed instead of subcontracted.

“The tasks at hand are ending the practice of subcontracting subway maintenance work that pertains to the safety of the citizens,” Park said, “to have Seoul Metro manage them directly and to discharge all former officials of Seoul Metro rehired at these subcontracted companies.”

The 19-year-old mechanic was employed at Eunsung PSD, a subcontractor of Seoul Metro, which operates subway lines No. 1 to 4. Eunsung PSD provides maintenance services at 97 stations for Seoul Metro.

Subcontracting jobs like maintenance generally cuts costs for companies but takes management of workers, including measures for their safety, out of the companies’ control.

The teenage mechanic was the third killed in action while repairing platform doors in the past three years. A 29-year-old mechanic was killed while working alone at Gangnam Station last year, and another was killed in 2013 at Seongsu Station. All three were subcontracted workers.

SMRT is another public corporation run by the city government that operates subway lines No. 5 to 8.

Seoul Metro’s contract with Eunsung PSD terminates at the end of June. Seoul Metro will hire and train new mechanics until August, when it will begin to directly manage maintenance work. During July, Seoul Metro employees and mechanics of Eunsung PSD hired part-time will provide platform maintenance service.

In addition to the teenage mechanic who died late last month, there are 16 other 19-year-old mechanics employed at Eunsung PSD. They will be asked to work part-time for Seoul Metro in July, and the recruitment process for a salaried job at the company will be open to them in August.

The mechanics will receive a 10 to 21 percent raise on their salary starting August. The mechanics at Eunsung PSD are currently paid some 1.6 million won ($1,360) per month. This will likely rise to some 2 million won per month if they are hired by Seoul Metro.

SMRT will also begin to directly manage maintenance work in September. The work is currently provided by its subsidiary company, SMRT Engineering.

“All former Seoul Metro officials rehired at the five subcontractors will be discharged,” Park said.

There are 136 former officials of Seoul Metro currently employed at its five subcontractors including Eunsung PSD. Of them, 106 are aged 60 or older, and most of the remaining 30 are in their 50s.

According to the Seoul Metropolitan Government, there were once 407 retired officials of Seoul Metro rehired at its subcontractors after the company first started to outsource the maintenance service in 2008.

“No former Seoul Metro official will be rehired for maintenance work to be directly managed by Seoul Metro from August,” Park said. “If anyone decides to take the matter to court, we will deal with it case by case.”