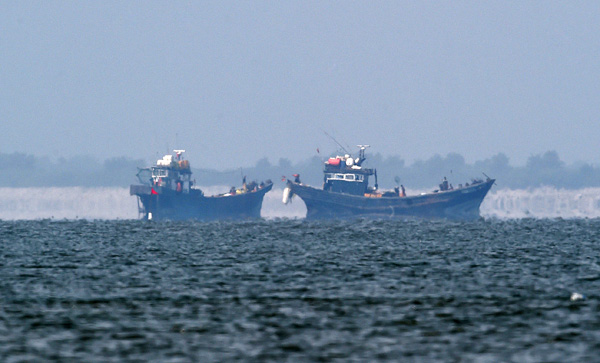 Trespassing into another person’s property to steal is an outright crime. Chinese fishermen who violate Korean waters and sweep away crabs and other living resources that should be reserved for Koreans are pirates.

The invaders are rough and do not fear Korean law enforcement officers. They are undermining China’s global rank and reputation. It makes one wonder whether so many people in China still have to break the law and market order to be able to make a living.

Chinese fishermen are being chased and caught at sea across Southeast Asia, Africa and as far as Latin America. F-16 jets and armed patrol ships are sent to the scene to scare the pirates away.

Fighting with invaders in the Yellow Sea has become a daily battle for local fishermen. A fisherman on the front lines at Yeonpyeong Island on the west coast said the villagers are able to see scores of Chinese fishing vessels commanding the sea near the Northern Limit Line, the maritime border with North Korea.

He complained that the local Coast Guard is of little help in fending off Chinese vessels violating Korean waters around the clock. The Coast Guard falls under the jurisdiction of the Navy. The Navy does not want the Coast Guards near the limit line for fear of triggering a skirmish with North Korea. The Chinese invaders are capitalizing on the weaknesses of Korean naval forces to transgress into Korean seas.

Local fishermen near these islands are restricted to fish at certain times and zones by the Navy. Their curfew is necessary in order to ensure the safety of Korean fishermen against dangers from North Korea. The regulations, however, do not help villagers whose livelihood hinges on sea yield. Park Tae-won, chief of the fishing village, said Chinese crab fishermen have been in Korean waters for the past 18 years, but they have never been as bold as they are these days.

“It is like the man of the house is tied up, while the burglar roams and helps himself to whatever he wants,” he said.

His peers went on their way to seize a Chinese boat. They staked their lives on this because they feel they can no longer depend on authorities to protect their means of living.

Words and actions pan out differently as far as blue crabs are concerned. Crabs may hardly be compared to security and cultural issues, but they concern the livelihood of Korean citizens. Diplomacy regarding crabs hits home with the Korean fishing community.

Some Koreans have become angry enough to question why local authorities do not just shoot and sink invading vessels. Their patience is being tested by the impudence of some Chinese fishermen.

The Chinese ambassador to Seoul, Qiu Guohong, raced to the Korean legislature to oppose deployment of the Terminal High Altitude Area Defense (Thaad) system on the Korean Peninsula. He relayed his protest to Kim Chong-in, interim leader of the Minjoo Party. He had abused the fissures in local politics for national gain with little respect for diplomatic decency.

This could be explained as an aggressive campaign to fight for national interest. But neighbors with intricate historical and geopolitical interests should be mindful of sensitive issues. Qiu should be as eager on the crab issue as he is about Thaad. He must explain to his president that the crab issue is crucial in order to win the favor of Koreans.

Chinese authorities must discipline their fishermen.