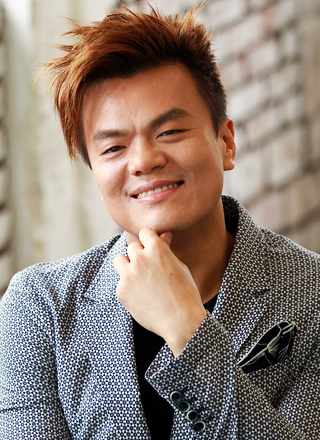 Singer-producer Park Jin-young will appear as a guest on the first episode of season three of the music program “I Can See Your Voice.”
The first shooting of the upcoming reality program, which will air its first episode in late June, took place on Thursday. While recording, Park said that he personally contacted the show’s production crew and told them he wanted to take part.

“Since I have experience in producing and directing singers, I think I will be able to differentiate between the tone-deaf and the skilled vocalists very well,” Park said during the shoot.

The music show revolves around a number of people performing in groups, some of whom can sing and some of whom cannot. And an invited guest attempts to guess whether a singer is a true vocalist or tone-deaf after hearing a song from each participant.

In addition to Park, singers Yeeun from K-pop group Wonder Girls and Junior from boy group Got7 also participated in the episode as panelists. The two belong to JYP Entertainment, one of the biggest talent agencies in Korea and run by Park.

The episode will air at 9:40 p.m. on June 30 through cable channels Mnet and tvN.