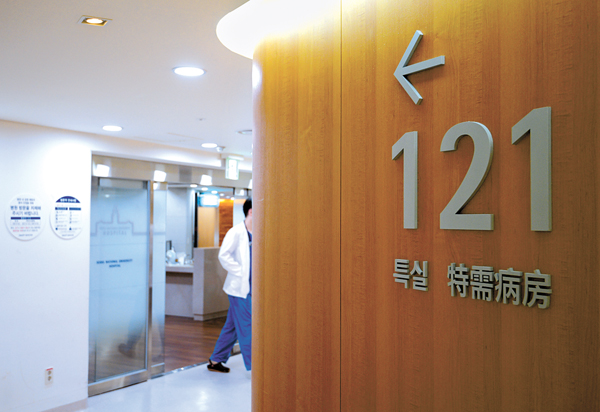 Lotte Group founder Shin Kyuk-ho has been staying on the hospital floor shown above for more than a week. Shin was admitted to Seoul National University Hospital in central Seoul after his temperature rose on June 9. [NEWSIS]

Lotte Group may have been funneling assets of its domestic affiliates into paper companies established overseas in order to create slush funds and evade taxes.

Seoul prosecutors said the nation’s fifth-largest conglomerate has unidentified internal transactions amounting to as much as 300 billion won ($256 million).

The critical evidence was spotted in files seized from Lotte Shopping’s headquarters on June 10.

According to the files, Lotte Home Shopping in 2010 established a paper company called LHSC in the Cayman Islands, widely known as a tax haven, in order to acquire the Shanghai-based home shopping company LuckyPai.

The paper company was established with an initial capital investment of 190 billion won through the home shopping affiliate.

However, despite the massive investment it received, LHSC recorded a 160 billion won loss last year.

Shin Kyuk-ho, the 93-year-old group founder, is also suspected of benefitting from selling shares of his own investment company at an inflated price to the group affiliates.

Shin had long been suspected of conducting improper business transactions through his own investment company called Lovest AG, which was established in the 1970s, but for which no detail information has been disclosed to the public.

Lovest is based in Switzerland and holds 6.87 percent of Lotte Corporation, a company which operates the troubled Lotte World Tower, Shin’s unfinished project.

Lotte Midopa, a retail arm of the group that is now merged with Lotte Shopping, purchased shares of Lotte Corporation worth 150 billion won. However, the purchase price is reportedly three times higher than the value, which at the time was approximately 10,000 won per share.

Lotte Group has been under fire several times for establishing paper companies overseas, which the group used to roll out mergers and acquisitions with foreign companies and exchange shares within group affiliates.

In 2013, the National Tax Service said Lotte Holdings Europe, which was established by Lotte Shopping in the Netherlands in 2008, was merely used as a means to commit offshore tax evasion. The fact that its headquarters is based in the Netherlands while the group’s European retail business is mostly centered in Russia has intensified suspicions.

According to its audit report, Lotte Holdings Europe has recorded an average yearly loss of 40 billion won since the business started there (except for the year 2012). Prosecutors are looking into whether the losses were accurate or whether Lotte Shopping has been inflating numbers to create a slush fund.

The widening investigation has halted ongoing and planned projects for the latter half of this year, including acquisitions of U.S.-based duty-free shop Duty Free Americas and hotel chains that were supposed to help Hotel Lotte advance into the foreign market.

Despite the investigations, Lotte Duty Free rolled out a road show in Shanghai on Thursday co-organized by the group’s three other tour-related affiliates: Lotte Corporation, Hotel Lotte and Lotte World Adventure to promote Korea’s tourism, including the Lotte World Tower, to some 250 local investors and journalists.