Seoul to Gangneung in an hour

Seoul to Gangneung in an hour 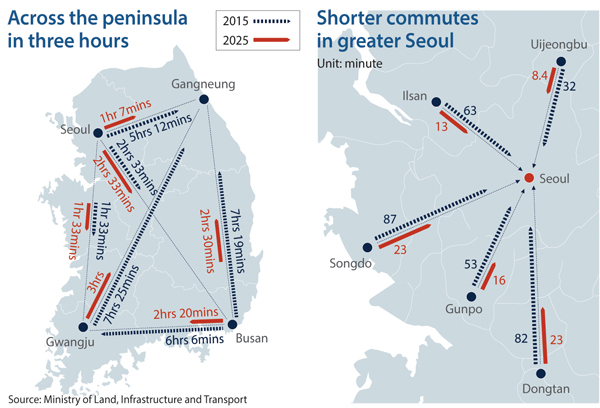 The government set plans to build high-speed rail lines in a 70 trillion won ($59.7 billion) project to connect major cities around the nation by 2025, cutting travel time between major cities significantly.

The Ministry of Land, Infrastructure and Transport announced that it has finalized a 10-year plan to improve the national railway network on Friday, and it said it will help reduce travel time not only between major cities but also commutes in the Seoul metropolitan area.

The plan calls for more high-speed rails that would allow trains to travel up to 300 kilometers per hour (186 miles per hour) or faster. Several existing rail lines will be upgraded to allow a quasi-high-speed train to run at a speed of about 250 kilometers an hour.

The government also wants to install train tracks in the northern Gangwon areas that have relatively poor transportation infrastructure.

Seoul and Sokcho in Gangwon will be connected through a new line that travels between Chuncheon, the Gangwon capital. Once this project is completed by 2025, people can travel from Seoul to Sokcho in only one hour and 30 minutes. The bus, which currently is the only transportation option available for the routes, takes 2 hours and 30 minutes.

Furthermore, the ministry said the project will have a positive impact on the local economy. “We expect that some 1 million jobs will be created and to have 140 trillion won worth of economic effect,” said the Trade Ministry.

The government also wants to improve traffic issues for people living in the Seoul metropolitan area. “We will have people from the metropolitan areas such as Ilsan, Songdo, Gunpo and Uijeongbu coming in to downtown Seoul within 30 minutes,” the Transport Ministry said.

The project aims to reduce travel time from Songdo to Seoul from 87 minutes to 23 minutes in 10 years. People in Uijeongbu could get to Seoul in just 8.4 minutes after the project.

Furthermore, the government said traffic will be eased as they plan to operate more railway services when the project is done. There are only 147 trains a day operating from downtown Seoul to Susaek, but it will grow to 387 a day.

The length of railway in Korea will be extended to 5,363 kilometers, up 43 percent from the current 3,729 kilometers, in 10 years. The Transport Ministry said it will help local manufacturers who will be able to use the extended rails to distribute their goods at lower costs.