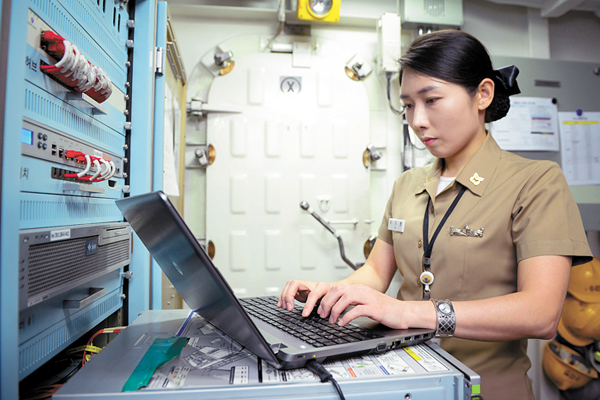 A female chief petty officer in the Navy, who once longed to become a flight attendant, became the first woman to earn a master mechanic license and operate state-of-the art weapons on a destroyer used to attack large warships and submarines.

Yoo Ji-hyun, 33, currently serves as the communications noncommissioned officer in the DDG-992, an Aegis destroyer named after Yulgok Yi I, a renowned Confucian scholar during the Joseon Dynasty (1392-1910).

The fleet is equipped with cutting-edge technology invented by the U.S. Navy, including three-dimensional phased array radar, SPY-1, and a vertical missile launcher.

“The technical expertise of the noncom officer is the key that determines the power of the ship,” one Navy official said.

Yoon, whose task lies at the heart of the nation’s military, is the first woman to earn a master mechanic license, the highest national technical qualification certificate.

“One can apply for the qualification test to become a master mechanic after working as a certified technician for five years,” an official from the Ministry of National Defense said Sunday.

“This is the first time a woman in the Navy has done so.”

Yoon started preparing for the license test in March 2015 and passed the test after about a year in May 2016. She is one of 42 master mechanics who have worked on the Yulgok Yi I fleet since 2010.

Despite such deep familial roots in the Navy, Yoon still went through many difficulties while preparing for the test.

Yoon is a mother of two elementary school children, and it was often difficult for her husband to help out around the house due to his work.

Yoon had no choice but to reduce the number of hours of sleep she had each night in order to complete her studies. She was on duty for eight hours whenever her fleet went out on a mission.

Even after the ship returned to land and Yoon went home, she started her studies late at night after putting both children to bed. Her fleet crews, knowing how arduous it was for Yoon to earn the license, call her “smartie.”

At first, Yoon actually aspired to become a flight attendant. She studied aviation at Dongju College but gave up her dream and instead became the first noncom officer in the Navy in 2003, as her father wished.

Yoon, who lacked expertise in communications equipment, initially struggled but gradually gained more experience after serving on the AOE-58, a combat support ship, and the DDH-976, a destroyer named after Munmu the Great, the 30th emperor of Silla (57 B.C.-935 A.D.). She also served in the Naval Operations Command.

“It was difficult,” Yoon said. “But I took the tests because I wanted to become a proud soldier.”