For students on Baeksan’s team, baduk is no game

For students on Baeksan’s team, baduk is no game 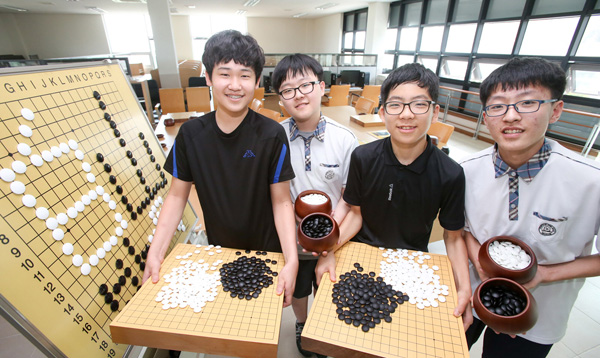 Four young boys face each other across a board for the game of Go, or baduk in Korean, at Baeksan Middle School in Buan County, North Jeolla. They look young, but their eyes glare with intensity.

Their names are Kang Yoo-min, Yoon Yea-sung and Kang Chang-hyo, the team winners for the baduk event at the 45th National Junior Sports Festival, which ended in May, along with Kim Yoo-chan, who transferred to the school earlier this month.

Baeksan Middle School participated in the event as a representative of North Jeolla, dominating teams from cities and counties around the nation. Baduk was selected as an official sport at the festival last year, and Baeksan has won the title two years in a row since then.

At Baeksan Middle School on Monday, the young baduk players, many of whom have played the game since they were five, are not very chatty. When asked something, they give curt “yes” or “no” answers, never taking their eyes off the board.

But when talking about baduk, they are full of opinions regarding which playing styles and professional players they prefer.

Kang Yoo-min, captain of the team, says he is more of a fighter who takes risks rather than one who stocks up as many points as possible throughout the game. He says his favorite player is Lee Se-dol, who played against Google’s AlphaGo algorithm earlier this year.

Teammates praise Yoon as the best player on the team, and he was picked as the most valuable player at last year’s junior sports event.

Yoon is preparing for tryout tournaments next month to become a professional player. If he makes it, there will be a total of five players on the team from Baeksan Middle School, including Kim Min-kyu, Kim Young-do, Ahn Jung-ki and Kwon Ju-ri.

Teammates say this year’s most valuable player was Kang Chang-hyo, but when asked about this, Kang smiles and modestly replies, “I am not so good.”

The baduk players meet after their regular school hours to review previous games and study how to escape life-or-death situation with the guidance of their coach, Kang Jong-hwa. They also sometimes play games online with other players.

Kim, the youngest player on the team, says playing baduk is similar to solving math problems. He adds that his favorite player is Kang Dong-yoon, who is known for his aggressive style.

The Korea Baduk Association and Buan District Government funded the school to create an official baduk team after the school’s students won the title at last year’s junior sports event.

Lee Joong-bae, the school principal, says he hopes his students will become mature by studying baduk.