Saenuri mired in chaos once again

Saenuri mired in chaos once again 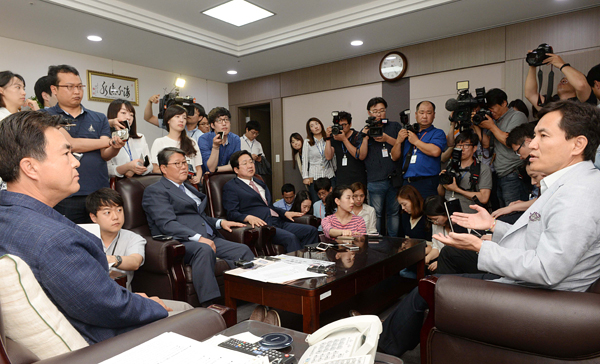 Lawmakers loyal to President Park Geun-hye meet in the Members’ Office Building of the National Assembly on Friday to discuss how to deal with the decision by the interim Saenuri Party leadership to reinstate seven lawmakers who left the party after being denied nominations to run in April. [NEWSIS]

The homecoming of Rep. Yoo Seong-min, a high-profile political enemy of President Park Geun-hye, instantly reignited factional conflict in the ruling party as loyalists of the president challenged Friday the legitimacy of his return process.

After hours of debate, the interim leadership of the Saenuri Party decided Thursday to reinstate seven lawmakers who left the party after being denied nominations to run in April.

The decision was based on a secret ballot in the 11-member Innovative Emergency Committee, an interim leadership body formed after the general election defeat in order to reinvent the party.

The Saenuri Party immediately restored membership to four out of seven independent lawmakers who already filed applications for reinstatement. Among the four was Rep. Yoo, who gained considerable public admiration after a political battle with Park.

Once an ally of Park, the two parted bitterly last year after she publicly condemned Yoo for “politics of betrayal” over a deal he brokered with the opposition as the ruling party’s floor leader. Yoo was forced to resign from the post and became an icon of resistance to the president.

The party’s nomination committee, controlled by Park loyalists, had denied Yoo’s request to run in Daegu’s Dong B District for his fourth term, claiming Yoo had a different ideology and philosophy from the ruling party.

Yoo subsequently left the party on the eve of the April 13 general election, ran independently and won.

He is now considered a possible presidential candidate.

Ambushed by the interim leadership’s vote to bring back the independents, including Yoo, Park loyalists started an organized move on Friday to attack Rep. Chung Jin-suk, the newly elected floor leader of the party.

They condemned the leadership for failing to collect party members’ opinions before deciding on Yoo’s return.

Shortly after the decision was announced, Park loyalists likened the vote to a “coup,” while Park adversaries called it a victory.

According to Saenuri sources, Chung asked party officials who are not interim leadership members to leave the room. He then proposed that the fate of the defectors be decided at the meeting.

Acting Chairman Kim Hee-ok, invited to head the party until a new leadership is elected on Aug. 9, said the decision should be made next week after listening to more party members’ opinions.

Participants said Chung told Kim, “It is a crime to not decide their fates today,” after which the mood quickly froze.

Min Se-jin, a Dongguk University professor and member of the leadership committee, reportedly proposed a “democratic process” to make the decision. A vote then took place.

The members first voted to decide whether the reinstatement should be decided on Thursday or not.

After more than six ballots supported making the decision, another vote took place to determine whether the party would accept all seven lawmakers at once or bring them back selectively.

“After the decision was made for everyone to return at once, Chung telephoned Kim Jae-won, senior presidential secretary for political affairs, and informed him of the outcome,” a senior party official said.

“But until then, the Blue House was in the dark.”

Acting Chairman Kim protested the leadership’s decision. His chief of staff, Rep. Kim Seong-dong, said he is seriously considering whether he should stay on the job or not.

Park loyalists furiously attacked Chung for the situation. They also held a meeting Friday afternoon to review whether there were any procedural flaws in the leadership’s vote to bring back the defectors.

“The party was about to reach a reconciliation when a few people decided to light a fire,” Rep. Cho Won-jin, a Park loyalist, told Yonhap News Agency on Friday. “And we just won’t allow it.”

Rep. Hong Moon-jong, a four-term lawmaker and key Park associate, told MBC Radio that the decision to bring back the defectors was made hastily.

“We are baffled,” he said. “I believe Chung feels some responsibility.”

As the mood became volatile, Rep. Suh Chung-won, an eight-term lawmaker nicknamed the “eldest brother of the Park loyalists,” tried to calm the situation.

“Although the interim leadership failed to collect the opinions of the party satisfactorily, we still need to follow its decision,” he said Friday. “This incident should serve as an opportunity for the party to find unity and reconciliation.”

“How can a secret ballot be a coup?” Kim asked. “Actually, the April nomination process against the public sentiment was a coup.”

He said demanding Chung’s resignation from the floor leader post will be a repeat of what Yoo went through last year.

“That is unfortunate and should never happen,” he said.

Kim said it was still understandable that the acting chairman felt uncomfortable about some of the vulgar language used during the meeting.

“Chung should seriously apologize,” he said. “But I don’t think Chairman Kim is protesting the leadership meeting’s decision.”

A battle between Park loyalists and her adversaries was destined to resurface, as they already fought once to form the interim leadership, known as the Innovative Emergency Committee.

An original plan to name Rep. Kim Yong-tae, a reformist, to head the committee was crushed by Park loyalists, and the current committee was only created after factional leaders agreed to a cease-fire.

The 11-member Innovative Emergency Committee was set on June 2. In addition to acting Chairman Kim, five outside experts were invited to join the committee.