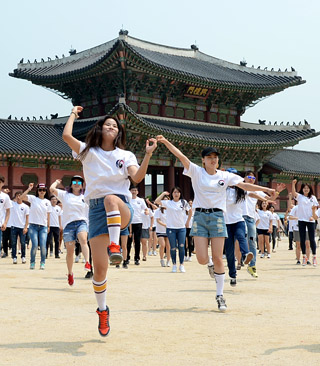 Dozens of young people perform a flash mob dance, tuning in to the campaign song “High Five! Korea!” for public diplomacy, in the Gyeongbok Palace courtyard in central Seoul on Friday. The flash mob dance was organized to mark the launch of a new nongovernmental public diplomacy corps consisting of about 300 people aged 20 to 69. [NEWSIS]