Most sterilizer victims have been abandoned

Most sterilizer victims have been abandoned 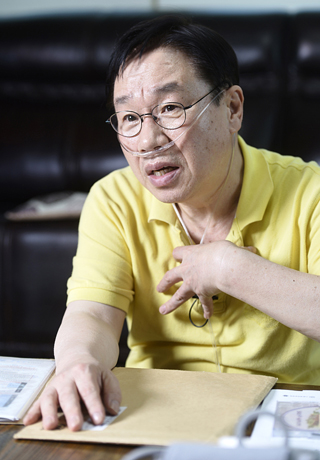 Kim Ha-yong, 62, is a first-degree victim of humidifier sterilizers. He used to swim every day, but during the interview with the JoongAng Ilbo on Monday, he had to catch his breath many times in order to speak, even while wearing a respirator. [OH SANG-MIN]


For 10 years, Mo Hwan-woo didn’t know why his son was born with immature lungs.

It was only when the government announced a recall of humidifier sterilizers containing toxic chemicals in 2011 that he remembered the humidifier sitting next to his wife during eight months of her pregnancy.

“My wife ran from cigarette smoke when she was pregnant,” Mo says. “Who would have known that a humidifier would do this? Doctors had to save my son with a C-section because he wasn’t taking in enough oxygen.

“Now he has cerebral palsy, and I’ve spent my life trying to help him,” Mo says.

Their son Kyung-ho, born in 2001, spent most of the early years of his life in the intensive care unit, in ambulances when he had overnight respiratory attacks and in hospital wings every winter for pneumonia.

Mo spent all his salary on his son’s medical bills. His wife left him in 2011, when Kyung-ho turned 10.

That year, the Korea Centers for Disease Control and Prevention linked the sterilizers to a mysterious series of deaths from pulmonary fibrosis.

Mo hurriedly registered his son with the health authorities to be confirmed as a sterilizer victim.

“The government calls my son a fourth-degree victim of humidifier sterilizers,” Mo says.

From one to four, victims are ranked based on how much the government deems their pulmonary fibrosis or illness to have been caused by the humidifier sterilizers.

Individuals are ranked as first- and second-degree victims when their epidemiological tests and biopsies reveal a clear or high causal relation between their pulmonary fibrosis and use of humidifier sterilizers.

They are ranked as third- and fourth-degree victims when the government has confirmed their exposure to sterilizers but cannot determine a direct link between their pulmonary illnesses or other complications with the sterilizers.

The government and sterilizer manufacturers provide medical assistance only to first- and second-degree victims, so Kyung-ho and his father Mo were left to fend for themselves.

They are not alone, either.

Ahn Eun-joo, a 48-year-old former volleyball player on the national team, spent her afternoon hours coaching students in middle schools when she suddenly found herself unable to breathe one day in 2010. The doctors told her she had interstitial lung disease.

Ahn has since spent the past six years in and out of hospitals. She received a lung transplant last year.

Ahn, a third-degree victim, says she received zero assistance from the government or manufacturer. She used an Oxy-brand humidifier sterilizer for two years from 2009.

Assisting Ahn in her all-too-frequent hospital visits to Seoul from her home in Miryang, South Gyeongsang, her husband had to quit his office job.

He now works as a day laborer.

Her son, in his first year in high school, is looking into specialized high schools instead of studying for the national college entrance exam.

“I couldn’t find my voice when his teacher called me and said that he told her he is going to try to earn money for the family,” Ahn says.

In the first two rounds of epidemiological tests, 309 out of 530 cases were determined by health authorities to be third- and fourth-degree victims. That is more than half the victims, and they are not receiving any help from the government or manufacturers.

“There is a high possibility that the sterilizers’ toxicity harmed other organs like the liver or kidney,” says Leem Jong-han, a professor at the Inha University School of Medicine.

“We can see from the clinical tests on animals that the toxicity of sterilizers can be passed on from mother to child through the placenta.”

Seoul National University’s reproductive toxicity test on the Oxy sterilizer product in 2011 found that 13 out of 15 baby mice died in their mother’s womb. 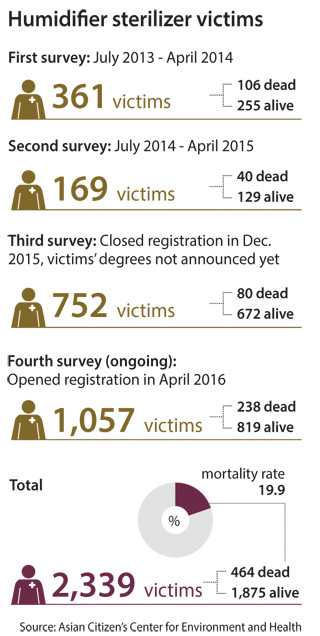 Many third- and fourth-degree victims were assigned their ranks because they do not suffer from pulmonary fibrosis but have other complications.

The Ministry of Environment began to pay for the medical bills of first- and second-degree victims, though only from 2014. By then, many had already spent fortunes.

Kim Ha-yong, 62, once ran a medicine retail company that made about 20 billion won each year. He was once an avid swimmer, too, able to do about 250 meters (820 feet) every day.

Now he can do neither of those.

“I first used a sterilizer in 2008 when SK Chemical sent them to me as a promotional item,” says Kim, a first-degree victim. “A year later, the doctor told me I had three months to live because half of my lung was scarred with fibrosis.”

Kim sold his company and put all his savings into his treatment.

“The manufacturers who stayed quiet for so long are now saying they will compensate us, but who knows when or how?,” he says.

Oxy Reckitt Benckiser, which caused the highest number of deaths among sterilizer manufacturers, has yet to announce its compensation plan. According to the findings of a prosecution probe early this month, the Oxy-brand sterilizer allegedly sickened 181 people, 73 of whom died.

Former and current CEOs of Oxy Reckitt Benckiser Korea have each promised 5 billion won in humanitarian funds to compensate the victims, but no specific plans have been revealed.

In addition to Oxy Reckitt Benckiser, prosecutors have investigated Lotte Mart, Homeplus and Butterfly Effect. Aekyung and Emart, which made sterilizers containing different compounds, were excluded.

But talk of compensation only wearies many of those actually affected.

“People ask how much I was able to get from the government,” says Ahn, the former volleyball player, “as if I’m raising my voice just for the money.”

For some, like Mr. Na, a 47-year-old father and husband, compensation cannot bring back their lost ones.