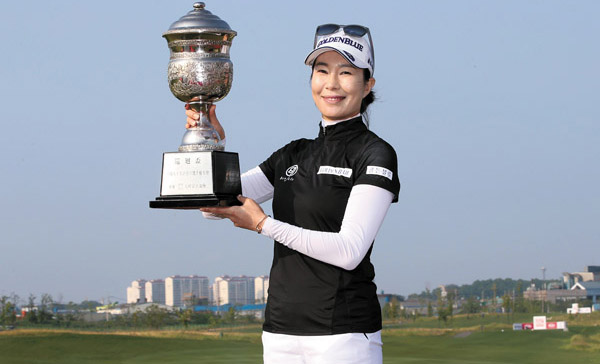 Ahn Shi-hyun shows off her trophy after winning her second KLPGA title at the Kia Motors’ the 30th Korea Women’s Open on Sunday. Ahn outperformed the defending champion Park Sung-hyun by one stroke to claim her first victory in 12 years. “I have been waiting and preparing myself for this moment for a long time,” Ahn said. [KLPGA]

Ahn Shi-hyun finally overcame a 12-year deficit to claim the second KLPGA win in her career on Sunday through her dramatic run at the KIA Motors’ the 30th Korea Women’s Open over the defending champ Park Sung-hyun.

The KLPGA major event held at Bear’s Best CheongNa Golf Club in Incheon was a roller-coaster ride for the veteran golfer. Although Ahn went 1-under on the first day, her pace from the first day quickly faded during the next two days, as she went 1-over par during the next two rounds. However, her shot at the title came alive when she nabbed two birdies during the first half of the fourth round. The 31-year-old golfer eventually cut three strokes on Sunday to finish the entire tournament at even-par. The runner-up Park finished closely behind Ahn, aggregating 1-over for the event.

The outcome of the tournament came down to the final three holes at 16th, 17th and 18th.

The par-4 16 hole was deemed one of the most difficult ones in the course, with a bunker and water hazard just to the right side of the green. Coming out of a bogey at the 15th hole, Ahn seemed calm and determined to par the hole, rather than risking it by going for a birdie. After her second shot which landed the ball at the left corner of the green far from the hole, Ahn left the gallery in awe with a brilliant long birdie putt, which essentially was the game-winning stroke for Ahn. She became the sole leader of the tournament with the birdie and made up for the bogey from the previous round.

The bogey at the 15th hole was the only one Ahn had on Sunday. Otherwise, she grabbed three birdies and parred the remaining 14 holes.

Ahn was first admitted to the Korea Ladies Professional Golf Association in 2002 and topped the KLPGA developmental tournament Apache Dream Tour to advance to the top tournament in 2003. She also first collected her LPGA win in the same year when she played in the CJ Nine Bridges Classic, an event that was sanctioned in Korea where she played under invitation. Her win at the CJ Nine Bridges Classic was significant in that not only was she the youngest non-American to claim the win in the tour’s history, but she also edged Korea’s golf legend Pak Se-ri along the way. After the victory in 2003, she was nicknamed “Cinderella” of the KLPGA and went on the next year to join the U.S.-based tour in 2004 where she became the rookie of the year. Ahn’s best record in the LPGA after her official admission to the U.S. league is when she finished as runner-up at the Women’s PGA Championship, one of the LPGA majors, as a rookie. Ahn also finished 16th in the money list that year.

In that same year, Ahn claimed her maiden KLPGA win when she finished first at the MBC-X canvas Ladies Open. Since 2004, however, Ahn’s career was mired with continuous slumps and struggles, unable to put out much notable performance until Sunday. Now that she has finally clinched the much-waited win, the veteran golfer seemed to have regained the confidence in herself.

“I have been waiting and preparing myself for this moment for a long time,” said Ahn, who seemed to be overwhelmed with emotion, during her interview after the win. “To be honest, I had feelings of doubt after the event three weeks ago [E1 Charity Open where she finished 40th]. I wondered to myself if my career had come to its end and if I should call it quits. But, thinking that this might be my last shot really helped, I believe.”

When asked what went through her head after she finished her round, waiting for the outcome of the event as the 22-year-old Park, who was five groups behind Ahn at group 35, was wrapping up the day, Ahn said, “I was quite nervous so I didn’t want to watch it. But, I had to watch it. Around the 17th round, I stepped out to practice [for possible playoff].”

“I just thought about grabbing comfortable par [at the 16th hole],” Ahn added about the birdie putt that essentially locked her win. “I felt that I have finally done it.”

“Don’t give up,” she finally said, advising the younger golfer. “[If younger golfers] continue down their path without giving up, they will see a bright light at the end. I hope everyone keeps up their fighting spirit.”