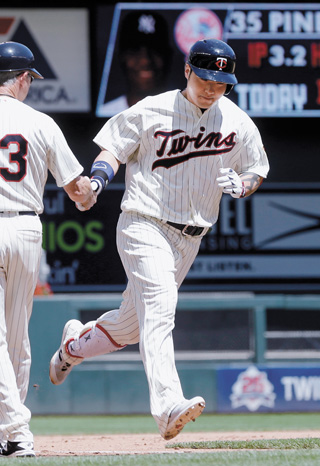 Park Byung-ho of the Minnesota Twins rounds the bases after hitting a two-run home run on Sunday against New York Yankees. Park’s 12th homer of the season came after his extended slump on the plate in the past two weeks. [AP/NEWSIS]

Park Byung-ho of the Minnesota Twins belted his 12th home run of the season, tentatively putting an end to a two-week slump.

During Sunday’s Major League Baseball (MLB) game against the New York Yankees at Target Field, Park went 1-for-3, driving in one run and tallying three runs-batted-in (RBI) to give the Twins an early lead.

Park started the game as a designated hitter. During his first at-bat at the bottom of the second, Park made contact against a slider by Yankees starting pitcher Michael Pineda but flied out to center.

His big hit of the day came at the bottom of the fourth. Stepping onto the plate with Brian Dozier on third base, Park cranked the first pitch by Pineda to right field, sending off a two-run homer and nursing a 3-0 lead by the end of the inning.

Park has struggled when runners have been on base this season, but Sunday’s homer was a sign that he can overcome that pressure.

“You’re looking for baby steps there,” said Twins manager Paul Molitor, according to MLB.com. “It’s been a battle for him to drive in runs when they’ve been out there in scoring position, and it’s become more mental, I think, than anything. We’re just trying to get him to relax a little bit and do what he does. I hope he builds on it. It was a better day.”

Park also contributed to the Twins’ next run at the top of the sixth, when he flied into a sacrifice double play. His hit brought home Dozier and allowed the Twins to take a 4-0 lead.

Park, who spent an epic decade in the Korea Baseball Organization (KBO), joined the big league this year with a $12 million contract over four years.

During exhibition games in March, Park accumulated a BA of .259, three home runs and 13 RBIs. His performance during the spring league boosted fans’ expectations for the two-time KBO MVP, who’s slugging abilities were projected to bolster the Twins’ batting lineup.

His power has been impressing fans, with the true distance of his first 11 home runs averaging 418.7 feet. Park’s second homer of the season in mid-April travelled 466 feet, making it one of the most powerful hits at Target Field in the club history as well as in the MLB this season. With hits like those, Park has secured a reputation as the team’s best power hitter.

But the past few games, the 29-year-old has been struggling to make contact on the plate. He was even excluded from the starting lineup last week when his batting average was close to dropping below .200 after a few hitless games. His inconsistency led some to worry about his competency on the plate, especially against fastballs.

Fortunately for Park, his homer on Sunday came off a 96-mile-per-hour four-seam fastball. That doesn’t necessarily mean he’s totally comfortable with Major League fastballs, but it is a positive indicator that Park can still show his power against the pitches.

Despite the slugger’s contribution, the Twins conceded seven runs-scored in the final three innings of the game to lose its chance at a win. The team’s losing streak continued to five games after Sunday’s 6-7 loss to the Yankees.