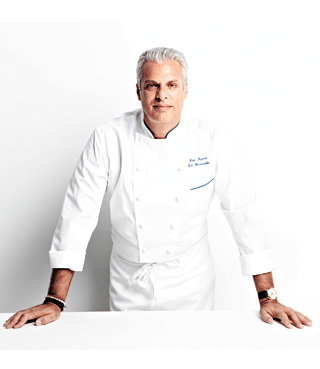 NEW YORK - While Korean chefs have been working to spread the gospel of Korean cuisine in the New York dining scene, chef Eric Ripert of the Michelin-starred restaurant Le Bernardin has already been converted and frequently enjoys Korean food, even putting gochujang (red pepper paste) on bread.

After years of incorporating Korean sauces such as gochujang and a variation of kimchi he made himself in his cooking, the French chef is now gearing up to write a book on Korea’s culture of fermented vegetables, with a special focus on temple food.

“The food you find at temples is healthy in the way that doesn’t create an unhealthy craving for food,” he said, drawing a comparison with snacks like chocolate that cause people to become attached to the taste.

“Also, I love the idea of fermentation done at temples because through fermentation, you create other living organisms beneficial to your health.” 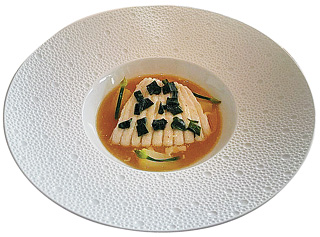 A dish of skate in radish and kimchi broth served at Le Bernardin in New York. [LEE SUN-MIN]

So the book will be a guide for those living in the United States and elsewhere in the world on establishing healthy eating habits by cooking food in the way of Korean temples.

“I will document some recipes and cooking techniques so that us Westerners can do it with ingredients available in the U.S.,” the chef said, adding that he hopes to be a bridge to introduce this little-known type of cuisine to a wider audience.

He plans to start on the project as early as next year.

As a Buddhist himself, Ripert has long been exploring the food served in temples. Although he said he has not tasted all the temple food across the world, what has caught his attention most so far are dishes in Korea.

During his past four visits to Korea, the chef has built a relationship with the Buddhist nun Junggwan Sunim, who is known as the foremost expert in Korean temple food, and has been learning from her and even bringing what he learned to the dishes he serves at his prominent New York restaurant.

He currently serves a dish of skate with radish and kimchi broth, and has also tried making his own Korean barbecue sauce.

Ripert has tried different types of vegetables and fruits such as peaches to make variations of kimchi. He said that while what he does may not be 100 percent authentic, he continues to update his dishes based on diners’ feedback.

To help people become more familiar with Korean food, the chef said an increase in tourism to Korea is essential. After spending time in the country, travelers will adapt their own ways of cooking their interpretation of Korean food, just as chef Ripert does by eating gochujang spread on bread and using other creative ingredients in his cooking.

“Even cooks and chefs working with me say they want to go training in Korea these days,” the chef said, adding that it’s now up to the gourmet community in Korea to accommodate the growing global attention on the country and its cuisine.

“In the meantime, Korean cuisine will find its way to keep the culture and flavors alive while not compromising too much.”