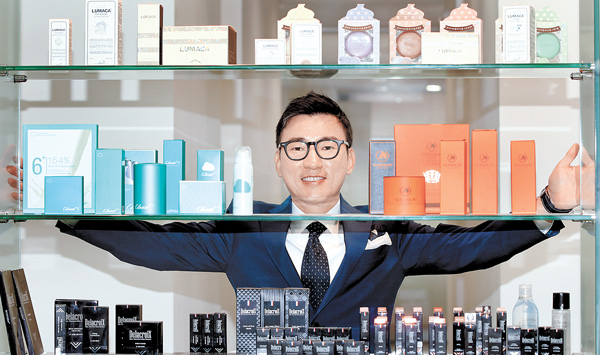 Cosmetics are often made from exotic plants and chemicals, but Guerisson 9’s main ingredient is strange even by those standards: oil extracted from horse fat.

Whatever it does, the product seems to be working - Geurisson 9 is one of the most popular cosmetics on the market.

From 2013 through this March, approximately 23 million tubs of the so-called horse oil cream have been sold, with many of those going to Chinese tourists.

This year alone, the company has already hit sales of 180 billion won.

The cream is Claire’s Korea’s most successful product, but it’s not the company’s first winner. Claire’s Korea previously enjoyed success with its freckle-improvement cream “Cloud 9” and whitening toothpaste “BlancSecret.”

The success of the cream was significantly helped by Lee’s high school friend and fellow executive Baek Hahn, who joined the company in 2013. Hahn had previously worked in advertising, and he targeted Chinese consumers by showcasing the cream on the Chinese program “I Am A Beautiful Woman.” He also made use of the Lotte Home Shopping channel and other Lotte Group distributors.

Lee is a graduate of the University of Seoul’s Department of Social Welfare, and before he started his company, Lee was an aspiring pastor.

Coincidentally, Lee’s father is a pastor who set up a toothpaste company in the 1990s when his ministry’s funds fell short. He returned to his flock after transforming the business into a midsize company worth 10 billion won.

“While attending college, I worked in my father’s toothpaste business, and I learned about business from befriending large-market merchandisers,” he said.

Lee entered the Fuller Theological Seminary in the United States upon his father’s advice in 2004, but he remained interested in distribution networks.

“When I would go to large retailers on the weekend, I would check out the display stands,” he said. “I paid close attention to the growth of the iPhone and the Apple store.”

Immediately after returning to Korea in 2010, he founded a start-up with 30 million won he got from mortgaging his apartment.

Course 9 will open a factory in Gimpo, western Seoul, next month to produce Claire Korea’s products.