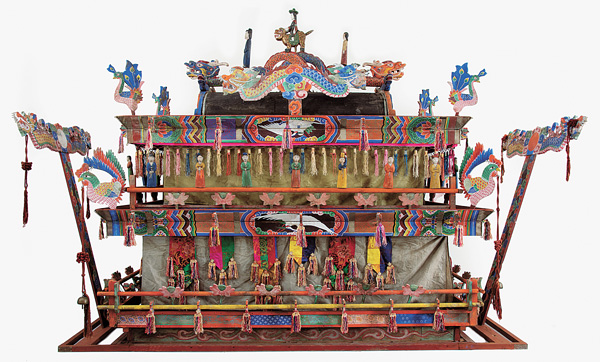 Although funeral ceremonies have been simplified today, Korean traditional funeral rites required following many procedures and even went on for up to five months. The National Folk Museum, in an attempt to allow young people in rural areas to learn about such customs, decided to organize an exhibition titled “Funeral Rites, Sharing Sorrow” at the Gyeongsan Museum in North Gyeongsang. The exhibition, which is being co-hosted by the two museums as well as the Kokdu Museum in Seoul, kicked off last Tuesday and will run through Aug. 14. It features various documents, colorfully decorated miniature funeral biers and kokdu, or wooden figures used to decorate funeral biers, shown above, as well as relics related to funeral rites. [NATIONAL FOLK MUSEUM]