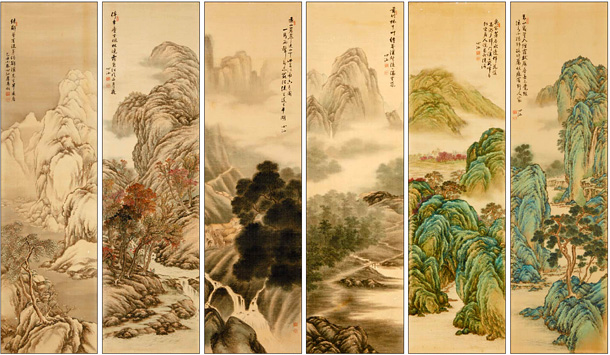 A landscape painting of the four seasons on a folding screen that’s 2.3 meters (7.5 feet) in length by Ro Su-hyoun (1899-1978) is the largest piece among about 80 modern paintings on display at the “The Masters of Modern Painting ? From Calligraphy and Painting to Image” exhibit that kicked off at the Horim Art Center in Sinsa-dong, southern Seoul, last week. Above are six panels, moving from spring to winter from right to left, out of the painting’s 12 screens. [HORIM MUSEUM]

It’s not easy to specifically define the style of modern Korean paintings. The styles were quite different for painters from different regions, different teachers and different political camps.

In the early 20th century, Korean painters began to adopt Western and Japanese techniques and at the same time mixed different techniques including Korean traditional styles.

Perhaps such diversity and mixing is what defines modern Korean paintings, but it’s quite difficult to grasp all the variations without studying a vast number of works at once.

Fortunately, about 80 paintings by 38 masters of modern Korean painting are being displayed at the Horim Art Center, the Sinsa-dong branch of the Horim Museum, a home to some 15,000 artifacts.

Although the center skipped on the champagne, as it is still in mourning for the late founder, Horim Yun Jang-seob, who passed away last month at the age of 94, it kicked off an exhibition last Thursday titled “The Masters of Modern Painting - From Calligraphy and Painting to Image.”

As the title implies, visitors will be able to witness how Korean art, which used to focus on calligraphic painting in the late Joseon Dynasty (1392-1910) became more image-oriented as the country underwent modernization and modern painters responded in their own ways to Western and Japanese influences.

All of the paintings on display are from Yun’s decades-old collection that he donated to the museum, and most are being revealed to the public for the first time, according to the art center. The exhibition also includes a painting by Min Young-ik (1860-1914) that Yun, an avid collector of Korean cultural heritage, purchased in March at Seoul Auction, making it the final item added to his collection.

“This is the very first time the Horim Museum is exhibiting such a vast collection of modern paintings that Yun had collected and donated to the museum,” said Lee Won-kwang, chief curator of the museum, adding, “We heard that Yun had really looked forward to the exhibition.”

So far, exhibitions and even research on modern Korean painting, according to the museum, were heavily focused on the Seoul Hwadan, known as the last group of government artists during the Joseon Dynasty that included artists who were students of master painters An Joong-sik and Jo Seok-jin. But while preparing the exhibition, the museum said it found that painters from the Kaesong and Pyongyang region of what is now North Korea, such as the four Hwang brothers - Hwang Jong-ha, Seong-ha, Kyung-ha and Yong-ha - as well as Kim Yun-bo, Yun Young-gi and Kim Gyu-jin established the first private art school after the dissolution of the Dohwaseo, the Royal Bureau of Painting, and fostered young painters, despite the chaos of the era.

On July 16, 1907, the painters advertised their “Art Education School” in a local newspaper, looking for students. The painting style of painters from this region, according to the museum, is known to be quite unique from other regions, such as using fingers instead of brushes or only using pen and ink instead of color. One small room of the exhibition hall is dedicated to these paintings.

The exhibition overall is divided in four sections, one each featuring landscape paintings and plant, figure and flowering plant paintings.

Curator Lee Jang-hoon suggests starting on the second floor where the largest number of landscape paintings are displayed.

“In this section, visitors can witness the gradual transformation of painting styles of Korean painters, moving from late Joseon painters like An and Jo to painters such as Lee Sang-beom, Ro Su-hyoun and Lee Yong-woo, who are known as the first generation of Korean modern master painters,” Lee said.

Ro’s painting on folding screens depicting the four seasons displayed in the same hall is the largest and perhaps most representative works among all the paintings in the exhibition, according to Lee. The total length is 2.3 meters (7.5 feet), with 12 panels. It was painted in 1925 on silk.

Since the artist, who was also a student of An, used different techniques to depict each season, it interesting to compare the sections. For example, for summer landscapes Ro used the smudging effect of paint for trees, and for winter he tried to make the outlines of the mountaintops disappear, making them look icy and cold.

“When he painted landscapes, it still showed An’s influence, but he developed his own style by strongly expressing the outline of the mountains and rocks, yet making them look soft at the same time,” Lee said.

“All these paintings testify to Korea’s transition in painting styles in the modern era and each of them are full of stories.”

The exhibition runs until Oct. 29.