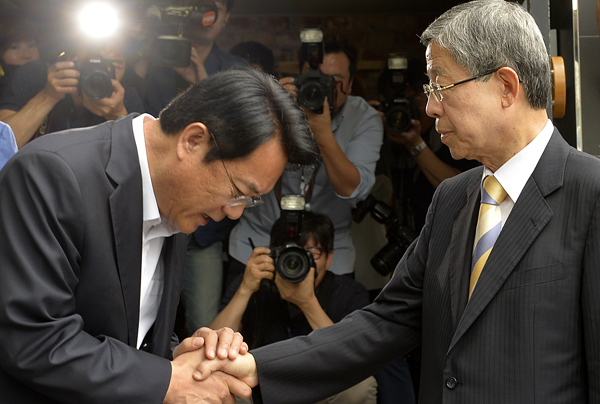 Ruling Saenuri Party floor leader Chung Jin-suk, left, bows to the party’s interim leader Kim Hee-ok after the two held talks at a cafe in Nonhyeon-dong in Gangnam District, southern Seoul, on Sunday. Chung apologized to Kim for the “rough manners” he had shown in the decision made Thursday to reinstate seven former party members. [KIM HYUN-DONG]

In the latest attempt to patch up internal division, ruling Saenuri floor leader Rep. Chung Jin-suk met with the party’s interim leader Rep. Kim Hee-ok on Sunday, apologizing for the “rough manners” he had shown in reaching the decision Thursday to reinstate seven former party members.

Chung’s meeting with Kim, which lasted around 30 minutes at a cafe in Seoul, came three days after the ruling party decided to reinstate seven independent lawmakers who quit the party after failing to win party nominations to run in the April 13 general election.

The party’s decision on the reinstatement drew heavy fire from members of the pro-Park Geun-hye faction as well as interim leader Kim, who said the decision-making process had been “undemocratic” and demonstrated an utter lack of party discipline.

Chung told Kim he sincerely “apologizes for his rough manner and the comments made during the course of the committee’s meeting” asked him to continue to lead ahead of the national convention on August 9, at which the party’s new leadership will be elected.

“I accept Chung’s apology on the ground that it bears sincerity,” said the former Constitutional Court Justice following the meeting.

On his way to meet Chung, Kim told reporters that he felt a sense of hopelessness about his abilities to unify the party and pursue reform at a time when its members were so divided.

Immediately after the meeting, Kim told reporters he was unsure whether he would maintain the interim leader position he was supposed to hold until the convention.

Later that day, however, Kim decided to continue in the position, according to Yonhap News.

Kim had signaled he might abandon his position, which he was tabbed to maintain until the party’s convention, after the decision Thursday.

Without disclosing the exact number of votes for the reinstatement, floor leader Chung said Thursday that the committee had stopped counting yes votes after it passed the majority of six.

The decision was based on a secret ballot in the 11-member Innovative Emergency Committee, an interim leadership body formed after the general election defeat in order to reinvent the party. It has led to an uproar among those loyal to the president as it means bringing back Rep. Yoo Seong-min, a high-profile political enemy of President Park Geun-hye.

Yoo had a public fallout with President Park last year when Park condemned him for his “politics of betrayal” over a deal he brokered with the opposition as the ruling party’s floor leader. Yoo was forced to resign from the post and became an icon of resistance to the president.

In his press conference announcing his resignation, Yoo said he had tried to keep his title despite pressure from the Blue House because he had wanted to protect the spirit of the constitution, citing the separation of powers, in what many saw as a blatant criticism of the president.

Yoo, a fourth-term lawmaker, represents Daegu’s Dong B district as an independent. He is expected to be a presidential candidate next year from the conservative bloc.