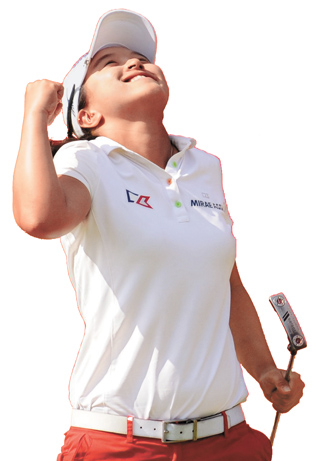 There is something about being in the playoffs that makes Korean golfer Kim Sei-young more focused and bold. This was apparent on Monday as Kim captured her fifth career LPGA title at the 2016 Meijer LPGA Classic in Grand Rapids, Michigan, through a dramatic sudden death round. After the win, which also doubled as her second title this season after the JTBC Founders Cup in March, Kim is 3-0 in the playoffs on the U.S.-based tour.

The 2015 rookie of the year began the final round of the event on Sunday tied at third and only one stroke behind the overnight leaders, her compatriot Chun In-gee and Lexi Thompson of the United States. Kim had shot 65, 69 and 65 during the first three rounds of the tournament, including an eagle in the third round.

Kim seemed solid during the final round, adding two birdies and no bogey at the first nine holes, only to add another two birdies at the 11th and 14th hole while parring the rest up to the 17th hole.

On the last day, Kim was assigned to the same group as Thompson, who boasts the longest average driving distance in the tour at 286.615 yards this year. But Kim was unfazed, sending the tee shot longer and more accurate than the American. Kim’s driving distance averaged 296.5 yards, while Thompson’s average was 293.5. At the 16th hole, she drove a 300-yard tee shot, 25 yards further than Thompson.

Going no bogey since the 13th hole in the second round, Kim seemed adamant not to lose that pace. By the 11th hole, Kim had taken up the lead along with Carlota Ciganda of Spain, only to become the sole leader past the Spaniard by the par-3 14th hole after carding a birdie there.

Although Kim somewhat struggled at the 15th and 17th hole, her accurate chippers saved the day as she parred the two holes. Her play in the 17th hole was especially noteworthy. After salvaging her ball out of the rough left of the greens, she nailed a two-meter (6.5-foot) putt to save par.

One stroke ahead of the runner-up Ciganda by the 17th, all Kim needed was a par at the par-4 18th. But, her route to the victory was proven more daunting than anticipated.

Just when Kim thought she secured her second title of the season, Kim quickly collapsed and bogeyed the final hole of the regulation. Her tee shot in the 18th was dumped into the rough after hitting a tree and she was unable to land her ball near the pin during the next two shots. Her fourth shot and the par attempt at the final hole was five meters long, which traveled left of the pin for Kim to pocket the first bogey in 41 holes. Compared to Kim, Ciganda was composed and parred the final five holes of the tournament to force the entire tournament into the playoff.

During the sudden death round, however, Kim proved once again that she indeed is the “Queen,” especially that of the playoff round, as she quickly rebounded from her poor showing to seal her victory over Ciganda.

At the par-4 18th hole for the first round of playoffs, the 23-year old Korean and the 26-year old Spaniard both roughed their tee shot. But while Kim’s approach shot landed only about one meter away from the pin, Ciganda’s shot traveled across the green to settle at three meters from the hole. Kim eventually went to birdie the hole while Ciganda recorded a bogey.

Kim has been confident about the playoffs since she joined the U.S. tour. Her first win of the LPGA came out of the sudden death round and she even carded an eagle during the extended round at the Lotte Championship last year over Korea’s Park In-bee.

“I’m just angry with myself,” Kim said about the bogey at the 18th, according to the Associated Press. “I just [thought], ‘Oh, I have to bounce back because today before I play, I’m setting my goal no bogey play.’ But last one I missed with bogey. If I bounce back, yeah, it is a good work, so I did it well today.”

The final day of the Meijer LPGA Classic coincided with Father’s Day in the United States, and Kim was more elated to present her father, Kim Jung-il, with a win.

“I’m very happy on Father’s Day to give my dad this trophy,” Kim said. “My dad really wants to win this week.”

Two other Koreans finished within the top 10, including Chun, who concluded the tournament third at 15-under, and Ryu So-yeon in sixth place at 13-under 271.