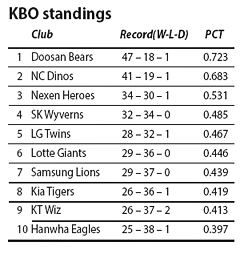 NC Dinos are still on a roll

Just how much longer can the NC Dinos extend its run? At the moment, the Dinos seem to be unstoppable as it is on a 15-game winning streak. After grabbing its 15th consecutive win over KT Wiz on Sunday, the team took fourth in terms of number of consecutive wins in a single season in the history of KBO.

SK Wyverns currently is at the top with 19 straight wins in 2009.

The team’s middle batting lineup, consisting of Na Sung-bum, Eric Thames, Lee Ho-joon and Park Sok-min, is deemed to be the main driver behind the Dinos’ run and its prowess on the plate was demonstrated during the game on Sunday.

The Dinos took an early lead when the team piled in four runs at the top of first. However, the game soon came to be a close struggle between the Dinos and the Wiz, and eventually, the Wiz took the lead by the fifth inning at 5-6. This was despite Park’s 12th-season homer early in the third inning that extended the lead to 5-3.

But, Sunday’s game turned out to be another comeback for the Dinos. At the top of sixth inning, three of the Dinos’ batters quickly got to base with two base-on-balls and one fielding error by the Wiz. It was then that the Dinos’ outfielder Na stepped into the field with his face stern and determined to make things happen. With the bases loaded, the third-batter Na swung his bat with everything he had and made solid contact with the pitch, driving a go-ahead homer all the way over the right fence. This was Na’s first career grand slam.

Apparently, his teammate wasn’t going to let Na steal all of the spotlight. Following Na’s grand slam, the fourth batter Thames stepped into the field and drilled a solo homer, his 20th home run of the season. Thames added another three-run dinger in the seventh inning and fifth batter Lee Ho-joon added another long hit immediately after.

After its home run festivity, the Dinos essentially rendered the Wiz’s attempt to return useless. The four batters made up for all 14 runs-batted-in that the Dinos collected on Sunday. 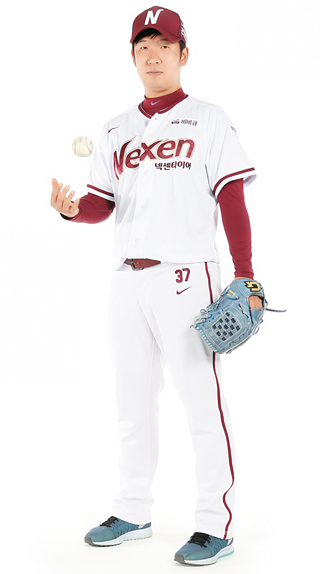 Paying his dues for the past four years, the sidearm pitcher of Nexen Heroes Shin Jae-young is finally receiving spotlight.

As of Monday, Shin is ranked at the top in earned run average (ERA) at 2.95, the only pitcher in the league with ERA less than three. He’s also ranked first alongside Dustin Nippert, Michael Bowden and Chang Won-jun of the Doosan Bears in terms of number of wins with nine.

Evident in the rankings in various categories, his pitching this year is top notch. He’s tossed in 79 and 1/3 innings and yielded only six base-on-balls, which is a notable testament to his pitching balance.

He’s gone through various unfortunate events in the past four years, such as being excluded out of the starting lineup and traded between teams. Now, it seems like he’s being more than compensated for the ordeals he has endured. Yet, Shin is rather reserved about the matter, saying what’s happening is bigger than himself.

“I was able to come this far with help from the batting lineup and relief pitchers,” said Shin. “I think I got the momentum after grabbing wins early in the season.”

Although some might say he hasn’t had a slump this season, Shin begged to differ. “After recording two straight losses in late April and early May, I was in a slump for sure,” said Shin. “I had so many different thoughts but a comment by coach Son Hyeok just hit me in the head,” Shin added. “He told me if batters figured out my pitching style, they probably have done it a long time ago. So [instead of trying to put variation into my style] he just told me to be bold on the mound and not ache over conceding one or two runs. After his advice, I grabbed a win in the next game and regained my confidence.”

Although he’s near the 10th win of the season, Shin says it is something he’s never imagined. “I can’t imagine how it would feel once I accomplish the feat,” said Shin.