Knitting rebellion against a digital world

Knitting rebellion against a digital world 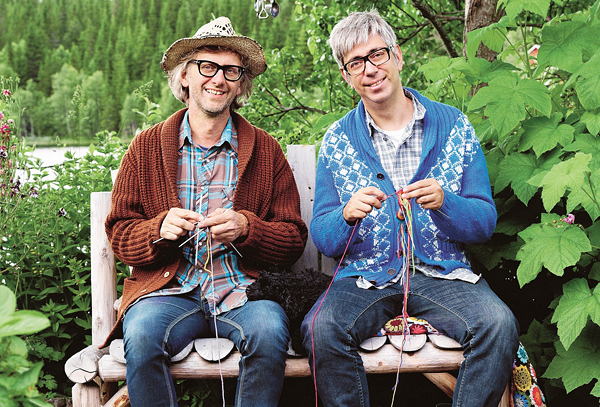 Arne & Carlos are artists whose love for knitting stems from their Scandinavian roots. They say that their job has never been stressful, as it’s both a relaxing hobby and a means of inspiring people around the world. [NORWEGIAN EMBASSY]

In an increasingly hectic and scheduled world, knitting can seem almost rebellious in its frivolity.

Drawing to mind warm fires and cozy couches, more than anything it takes time - something that for many is in short supply these days.

But for Arne Nejordet and Carlos Zachrison, that’s the point. The knitting duo says the activity gives people the much-needed chance to de-plug, unwind and take some time for themselves.

They appear on the television shows, publish tutorial books on knitting and develop unique patterns for sock yarns under their brand name “Arne & Carlos.” They launched the brand in 2002 and sold ready-to-wear knitwear, but they soon lost interest in pre-made products.

“At some point, we started to get bored. We’ve always wanted to change our point of view from making a product to creating a story,” Carlos said.

Now, they travel around the world to actually knit with their fans: in September, they will run a knitting retreat in New Hampshire, United States, with about 70 people.

They visited Seoul last week to meet their Korean fans, and the Korea JoongAng Daily sat with the artists to discuss their work, and how at the center of it all is a deep love for Scandinavian culture.

Q. Please tell us how you formed your own brand. How did you become partners?

A. Carlos: We met in 1999 in Norway. Arne has just gotten a job in Jakarta, Indonesia. He originally taught fashion design at design school called Esmod. And I had actually gotten a job in Ikea, the buying office at Beijing.

I really didn’t want to go there because I thought it would not be challenging enough. And it was same for Arne. He didn’t want to leave for Jakarta but didn’t want to stay at the school as well. It took about two years of preparation and in 2002, we launched the knitwear brand. We sold our collections to high-end stores around the world but turned to craftwork and creative design in 2009.

Arne: I have a background in pattern design so I tend to be more detailed. But he didn’t have that background and thinks out of the box. It’s good that we can complement each other because it can be difficult when there’s no one to [edit your work].

You seem to perceive creating a pattern as developing a story. How do you get inspired?

Carlos: We really like to look at our own culture. Being a designer is actually just referencing your culture and identity and recreating them in your own ways. And we can touch people in that way. There are different ways to do it. First, we look at our cultural heritage, as Scandinavia has rich culture in knitting for hundreds and hundreds of years. When you look at your past and history you tend to reinterpret it in new, modern way and your own way.

Another way is to look at the existing patterns and decompose them, taking them apart. And then we build them back together in new ways. These are the ways that we usually do: referencing back.

The world has become digitalized and handy digital devices often entertain people in their daily lives. Despite the trend, why do you think your work, which takes a lot of time and effort, is gaining so much attention?

Carlos: Many of our fans come from industrialized countries. I think it is a reaction to the world we’re living in, which is digital society. It is a counter-trend that helps people balance more. I think it’s about stopping, unwinding. Also, they need something to do with your hands. Because it is all computerized, I can hardly sign my name because I don’t use my pen to write. Paper therefore becomes more interesting.

You originally produced ready-to-wear knitwear, but then you decided to concentrate on creative designs. What’s next?

Carlos: We opened the Youtube channel in January, which is growing more and more popular. We upload one tutorial per week. ... We appear on knitting channels in Norway and England as well.

Do you have any message you want to tell knitters?

Carlos: I think it’s important that people enjoy it. There are things that we have around that make you become hard on yourselves. But when it comes to knitting ... Results don’t matter. What’s important is the fact that you’re knitting.