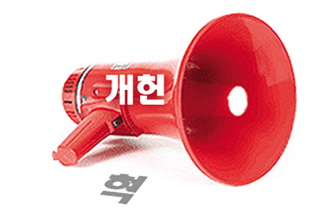 The latest calls for a constitutional amendment are likely to produce unintended outcomes. While the objective is to upgrade the Constitution, discussion on a constitutional amendment could lead to ironic outcomes, exposing an unbearable discrepancy between lawmakers and citizens. As we discuss what problems Korean society has and how to fix them, we should wonder whether career politicians and ordinary citizens live in different countries. Just as champions of the amendment emphasize, changes in important systems are possible only when the community shares a sense of crisis and has agreed on a systematic alternative to break through the crisis. The problem is that the crisis the constitutional reformists mention is quite far from the crisis of living that average citizens face in their daily lives.

Therefore, in order to break through the crisis of the 1987 system, the power structure should be changed to a dual executive system in which diplomacy and military affairs are handled by the president while internal affairs are in the hands of the prime minister; alternatively, they call for a four-year, two-term presidency or a parliamentary system.

But the crisis that average citizens face in their daily lives is fundamentally different. The threats to people’s lives today originate from the changes in technology and economics; in other words, from the end of human labor in the industrial period we have become accustomed to. Millions of young people are unemployed, and those who manage to find an irregular job are at risk, as illustrated in the tragic incident at the Seoul Metro Guui Station. The gigantic changes in technology and economic paradigms are shaking the lives of the people.

For the past century or so, the industrialized economy operated on the foundation of mass production, mass consumption and mass employment. But the system is swiftly shifting to a smart economy, with robots replacing human labor and artificial intelligence threatening human roles. Just as the arrival of the SS General Sherman, a U.S. merchant marine steamer, on the Daedong River in 1866 awakened the agricultural society of Joseon and signaled the advent of industrialization, AlphaGo’s match against Lee Se-dol in March was a shocking opening of the age of artificial intelligence.

The second era of machines, where machines with intelligence replace not only factory workers but also professionals like doctors, professors and lawyers, is fast approaching. The new economy led by AI, virtual reality and the Internet of Things will destroy schools that teach standard knowledge and also destroy countless jobs. Furthermore, the new economy will shake the fundamental roles of large enterprises, labor unions, parliaments and modern governments that composed the backbone of industrialization. In other words, the crisis we are faced with is not 1987’s democratization. The crisis is in the Korean industrial system that began in the 1960s, because the modern industrial era that began in 19th century Britain is coming to an end.

Faced with a crisis shaking up the existence of business, government and parliaments of the modern industrialization era, the supporters of constitutional amendment propose a new power structure that will allow coalitions, create jobs and catch up with the fourth industrial revolution.

But because baby boomers will live more than 30 years on average after retirement, will they believe that a new power structure can really solve their crisis of living? Will the retirees who are pushed out of declining industries such as shipbuilding, marine transport, construction and steel be convinced that a dual executive system or four-year, two-term presidency will solve the problem?

What citizens expect from Yeouido politics is not some miracle of adding new jobs and creating a welfare state all at once. They desperately hope for politics that can view and empathize with the struggles of average citizens. When the discrepancy between the crisis that people are faced with and the crisis that politicians talk about remains wide, the crisis could lead to overwhelming anger.

Donald Trump’s popularity in America and the rise of the radical right in Western Europe are painful groans about the politics of grand causes far from people’s lives. Before the anger over malfunctioning causes an explosion, politicians must reduce the gap between the people’s crisis and the political crisis. Then they can discuss constitutional reform.


*The author is a political science professor at Chung-Ang University.