Spending on lunches spirals down

Spending on lunches spirals down 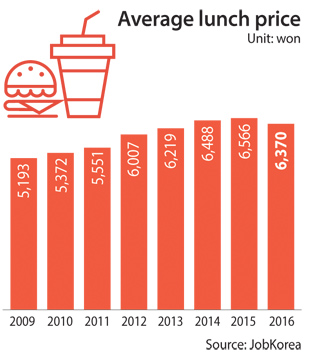 Korean workers are spending less on their lunches this year - and the number of people who bring lunch from home is on the rise.

According to JobKorea, one of the country’s major job information portals, the average price of lunch for office workers grew for six straight years after the agency started compiling data in 2009. The rise was about 4 percent a year.

One of the factors in the drop was a rise in the number of people packing their own lunches or buying food at convenience stores to eat alone instead of going out to restaurants.

“It appears that many workers are now trying to spend less by bringing a packed lunch to work or buying precooked foods at nearby convenience stores as they are experiencing tighter financial situations compared to the past,” JobKorea said in a press release Monday.

In fact, only 43.9 percent of 1,115 survey participants said they eat at restaurants near their workplaces, a sharp drop from last year’s 68.7 percent.

Workers packing their lunches or buying food at convenience stores rose from 7.9 percent to 19.7 percent during the same period.

Furthermore, many workers feel that lunch prices have increased compared to last year. Some 27 percent of survey participants said it rose a lot, and 46.3 percent said it rose a bit.

Workers spent an average of 4,882 won to buy lunch at convenience stores and 4,735 won to pack their own.

Asked how they choose what to eat for lunch, some 50 percent said price matters most.