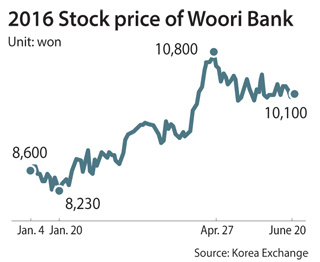 Woori Bank, the only state-owned commercial bank in Korea, has been in the spotlight again recently, as the government is making its fifth attempt to privatize the state-run bank.

Despite past failures, the bank deal could be realized this time.

“The circumstances surrounding the sale of Woori are moving in a relatively positive direction,” Yim Jong-yong, chairman of the Financial Services Commission (FSC), said last week.

Stock prices and earnings data have greatly improved. Shares of Woori Bank have been moving up and down the 10,000 won ($8.60) range after languishing at the 8,000 won range at the beginning of the year.

The bank reported 443.3 billion won in net profit in the first quarter, a surprise result that surpassed analysts’ expectations. Brokerage houses such as Mirae Asset and Hana Financial Investment have recently scrambled to adjust target prices for Woori to 15,000 won and 14,500 won.

Woori also has seen the asset quality improve. The ratio of its nonperforming loans that are overdue for three months or longer dropped to 1.38 percent as of the end of March. Despite the bank lending 5.3 trillion won to troubled shippers and shipbuilders, 85 percent of the loans, or 4.5 trillion won, went to Hyundai Heavy Industries and Samsung Heavy Industries, which hold sufficient assets.

“Woori Bank has been relatively underestimated due to the fact that it has lent money to industries that are sensitive to the economy, but the time has come [for analysts] to re-evaluate the bank’s condition,” said Eun Kyung-wan, an analyst at LIG Investment & Securities.

Lee Kwang-goo, CEO of Woori Bank, held a third investor relations (IR) session in Japan from June 15-16 after hosting the first one in Europe and Singapore and the second in the United States this year.

While the bank actively seeks to find a new private owner, the Public Fund Management Committee of the FSC and the FSC itself, the de facto holding body of the bank, is taking a rather cautious position.

“There is nothing planned on how much stake in Woori Bank will be sold and when to announce the beginning of the deal,” an FSC spokesman said.

“It’s true that the mood has gotten much better, but it’s hard to say there is heated interest [in the Woori deal,]” said Yoon Chang-hyun, head of the FSC Public Fund Management Committee.

Still, many observers predict the sale will be completed by the end of the year, given FSC Chairman Yim has reiterated his firm will proceed with privatization of the bank both in public and private recently.

There is a high chance Woori Bank will sell a 30 to 40 percent stake out of 51 percent owned by the Korea Deposit Insurance Corporation (KDIC). The KDIC is likely to split 4 to 10 percent of the shares, and those who bid higher get to purchase.

The bank aims to maximize the public fund payback by allowing the KDIC to hold the rest of the unsold shares and liquidate those shares later when there is an increase in stock price; 3.5 trillion won could be collected as public funds if 51 percent of KDIC-held shares are disposed of at 10,000 won per share.

However, uncertainties linger over Britain’s potential exit from the European Union, known as Brexit, and other volatilities in the market.

The biggest obstacle is precedent experience of failing privatization four times in a row since 2010. Woori Bank received numerous letters of intent, but opportunities for privatization failed due to lack of participation in tender in reality. “There is a clear difference between investors showing interest during IR conferences and those investors actually participating in tender.” Yoon said. “Liquidation will at least be available if investors suggest specific purchase amount with price for shares.”

The financial community expects public notice for disposal by the FSC in August or September. After a two-month liquidation procedure, Woori Bank will finally have new private management in control of the bank in October or November. Lee’s two-year term as CEO of Woori Bank expires at the end of the year.