Inflation low, except on the bus

Inflation low, except on the bus 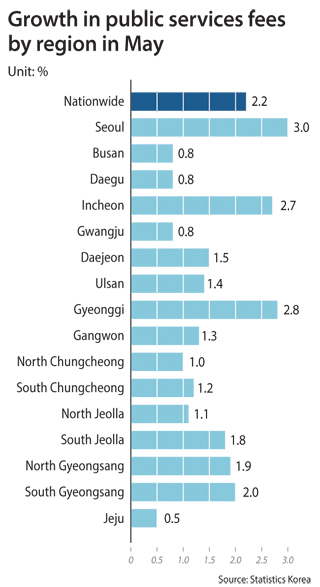 Data from Korea’s central bank and its statistics agency show that low inflation and slow economic growth are persisting, but prices of public services have spiked, increasing the financial pressure on Korean households.

According to an announcement Monday by the Bank of Korea and an earlier report from Statistics Korea, charges for public services such as mass transportation and sewage jumped 2.2 percent during the year ended in May. Consumer prices overall rose only 0.8 percent that month.

A major element in the higher prices was increased fees for public transportation. Operators in Seoul, Incheon and parts of Gyeonggi Province raised urban bus fees by 150 won (13 cents) and subway fees by 200 won in June.

Other urban areas followed suit. Ulsan bus rides jumped by 110 won, nearly 10 percent; the hike was 12 percent on average in Pohang, North Gyeongsang. In Gumi, fares rose by 100 won and in Kimcheon by 200 won.

An official at Statistics Korea said the fare increases were the main factor in the 2.2-percent hike in all public services charges during the 12-month period ending in May. Prices for all public services have been rising by 2 percent annually every month since October.

Until 2008, growth in those prices remained below the overall increase in consumer prices, but since 2009, public services inflation has outstripped that of inflation overall. If the trend continues, the annual growth in public service prices would be the highest in seven years, according to the official.

The government is planning to raise water and sewer prices in stages through next year. Last year, water charges increased by 3.1 percent, and sewage fees spiked 20 percent.

“I don’t understand why I hear news about low prices,” said Kim Mi-young, a housewife in her 50s. “Unlike the index numbers I see every month, we are feeling the pinch because our daily expenses keep rising.”

According to the BOK, the producer price index fell slightly to 98.68 in May. Changes in that index usually are reflected in consumer price changes a few months later, suggesting a continuation of low consumer inflation. Over the 12 months ending in May, producer prices fell 3.1 percent.