After a blockbuster merger between Mirae Asset and Daewoo Securities, the local brokerage market is waiting for a second round of mergers and acquisitions in the second half.

The brokerage companies up for grabs, though small in size compared to those in recent deals, will be able to shift industry rankings and spur consolidation of the sector.

Hi Investment & Securities is among the primary sales targets. Hyundai Heavy Industries, the money-losing top shareholder of the securities company, is putting the brokerage to market to increase liquidity and raise funds required for restructuring.

Affiliates of Hyundai Heavy Industries, including Hyundai Mipo Dockyard, hold a combined 85 percent of the shares in Hi Investment & Securities. 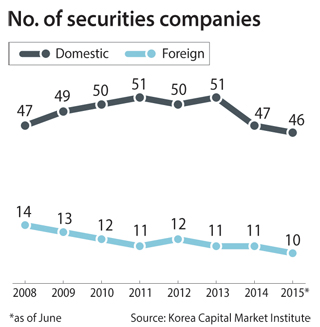 When combined with Hi, Korea Investment & Securities could move into the top three in the sector by total assets, with 4 trillion won in its accounts.

Hi could sell for as much as 1 trillion won, but because of slow growth in the securities industry, many industry figures estimate the sale to be made at somewhere between 500 billion won and 600 billion won.

Several banks without any securities affiliate may be interested in the upcoming bidding.

“There are banks based in cites outside of Seoul that don’t have securities units. Hi Investment & Securities could be attractive to those companies,” said Won Jae-woong, a researcher at Mirae Asset Securities. “DGB Financial Group and JB Financial Group will likely bid.”

SK Group, which owns SK Securities, has to sell its 10 percent stake in the securities company to comply with fair trade laws that prohibit a nonfinancial holding firm from owning shares in a financial company.

The country’s third-largest conglomerate was given a grace period to sell; it expires in August 2017. If it fails to meet the cutoff date, it would face about 10 billion won in fines.

Smaller securities firms are also targets of mergers and acquisitions.

LIG Investment & Securities, a small brokerage, was recently sold to Cape Investment. The sale deal will be complete as early as this month; financial authorities have given their approval.

Leading Investment & Securities has been up for sale for five years and has seen several aborted attempts. It recently selected CKK Partners as a preferred bidder.

There were 46 local securities companies in Korea in 2015, according to the Korea Capital Market Institute. There were 51 in 2011, but experts say further consolidation is needed, considering stagnant growth and the relatively small market size in Korea.

“The local securities industry faced slow growth in recent years, but there were no big changes in the number of securities firms,” said Park Yong-rin, head of the financial services industry division at the Korea Capital Market Institute. “The industry will come under stronger pressure for mergers and acquisitions if the downturn in profits continues.”

Amid the unfavorable conditions, some financial companies have adopted cost-cutting measures. Daishin Securities has offered early retirement to employees for the first time in the company’s history.