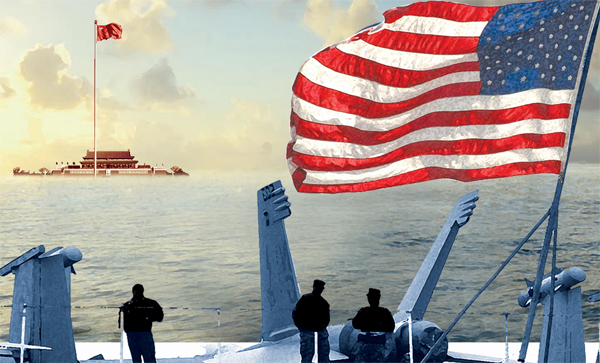 “Can I discuss the South China Sea conflict first and then go back to North Korean affairs?”

At the U.S. Pacific Command headquarters in Hawaii, Rear Adm. Mark Montgomery stopped questions as he briefed journalists from the Korea News Editors’ Association. Questions were focused on Korean Peninsula affairs, such as the North Korean nuclear threat and deployment of the Terminal High Altitude Area Defense (Thaad) system.

China made seven artificial islands, and three of them have airports with runways from which bombers can take off. The United States stood up to protect freedom of navigation, which is why Washington urges allies to pay attention, Mongomery said.

He also said that the Korean people have unfavorable feelings toward Thaad deployment because of Kim Jin-myung’s novel “Thaad” and asked if the journalists had actually come to believe Thaad is aimed at attacking China.

Montgomery’s response illustrated China’s opposition over Thaad deployment in Korea and the U.S. military’s attention to the sentiment in Korea. He added that U.S. Forces have to cooperate with ROK Forces and Japan’s Self Defense Forces in case of emergency on the Korean Peninsula, emphasizing that it would be hard to succeed if Washington works with Seoul and Tokyo separately, reflecting U.S. concerns about friction in Korea-Japan relations.

The briefing continued at the Hickam Air Force Base in Hawaii. A high-ranking official said that the commander of the U.S. Pacific Command, Adm. Harry Harris, visited India and discussed naval cooperation. The official said Admiral Harris had remarked that a powerful nation was threatening smaller countries and urged cooperation between India and the United States against China. Recently, the U.S. Pacific Command has been keeping India as an ally to check on China with the vision of stability in the India-Asia-Pacific region.

The U.S. Pacific Command is in charge of operations for 52 percent of the earth’s surface. Their strategic focus has clearly moved to the expansion of China in the South China Sea.

At the security seminar with the Korea News Editors’ Association, Dr. Denny Roy of the East-West Center at the University of Hawaii said the problems in the South China Sea raise questions about the U.S.-led system, adding that as China becomes a major power, he was not sure whether a satisfying balance could be found.


*The author is editor-in-chief of the JoongAng Ilbo.