Lotte moves to sell liquor in Australia and China

Lotte moves to sell liquor in Australia and China 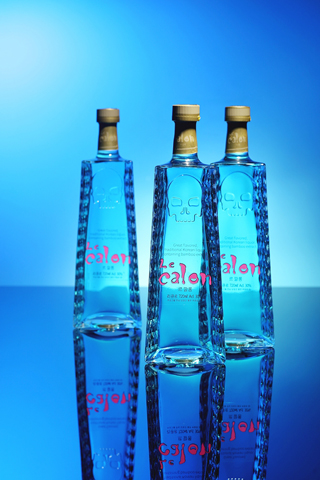 Le Calon is a Korean drink made of bamboo extract that was developed to substitute for imported liquor such as vodka and tequila, which are especially popular at local clubs and bars. [LOTTE LIQUOR]

Le Calon is a liqueur co-developed last year by Yang Dae-soo, a liquor master who heads distiller Chusungju and Lee Kang-hee, a CEO of Syndrome, a popular club in southern Seoul, specifically targeting heavy drinkers in their 20s and 30s.

The drink is poised to change the landscape of liquor consumed in Korea’s bars and nightclubs which has long been highly dependent on imported liquor such as vodka and tequila. Its domestic followers have gradually been increasing since its launch last year.

“Calon” means cool and posh in Korean regional dialect. The glass bottle is installed with LED lighting at the bottom, an apt function to make the drinking experience in dark underground spaces more fun.

The blue-colored liqueur is made of bamboo extract and has an alcohol content of 30 percent. However, since the bamboo extract has no distinct taste, coconut and melon flavors are added.

“Utilizing our experience in exporting local drinks, we hope for a win-win strategy with domestic mid-sized distillers that produce high-quality drinks,” Lotte Liquor said in a press release Monday.

Lotte Liquor added that it wanted to show drinkers overseas that there is more to Korea’s liquor scene than makgeolli (traditional rice wine) and soju, which are relatively more generally consumed for the cheap price tags and its low containment of alcohol.

Chusungju is based in Damyang, South Jeolla, a region famous for growing bamboo. The company has been making strong traditional liquor with local ingredients such as rice, medicinal herbs and bamboo leaves since 1994. The alcohol manufacturer entered the Japanese market in the 2000s with its flagship herbal drink Chusungju. It has not entered Western markets before, according to a Chusunju spokesperson. Lotte Liquor has been selling diverse local drinks, including its own soju brand Chum Churum and beer brand Kloud to some 50 countries worldwide.