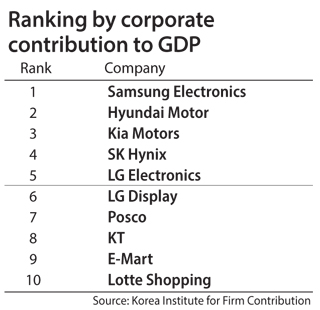 The assessment, which marks its fourth year, is held annually by the institute by analyzing conglomerates’ business reports from last year.

According to the assessment, 20 large companies including the nation’s conglomerates contributed to 87.6 trillion won ($74.5 billion) in national income, 14.7 trillion won in national finance and created 1.35 million jobs.

Economic contribution from SK Hynix and LG Display grew the most. Among business groups, SK, Hyundai Motor and LG had the biggest growths in their contributions last year.

A notable factor in this year’s overall assessment was the sluggish sales performance by conglomerates. According to data analyzed by the institute, sales of 473 conglomerates in 10 industries such as electronics, automobiles and retail began declining in 2012. Last year, their sales fell 127.6 trillion won compared to a year ago.

“Sluggish sales performance of conglomerates may lead to an economic crisis in the country,” said Lee Jong-cheon, chairman of the institute. “Revenues have been falling for all 10 industries except for automobiles and construction, which means our economy is getting more difficult by year.”

The conglomerates’ revenue fall that began in 2012 coincided with the decline of the nation’s export sales.

“A boost in the nation’s economy begins not from expanding the domestic market but from increasing foreign exports and bringing in foreign capital,” said Han Jong-soo, a business professor at Ewha Womans University who participated in the assessment.

Regarding ongoing discussions in the political sector on corporate tax hikes, Chung Moon-jong, an Ewha business professor said, “It could push conglomerates into a vicious cycle where source of investment on R&D declines, companies’ global competency falls by lack of investment and their revenue falls.

“Economic boosting is a better way of collecting taxes than to merely raise corporate tax rates.”