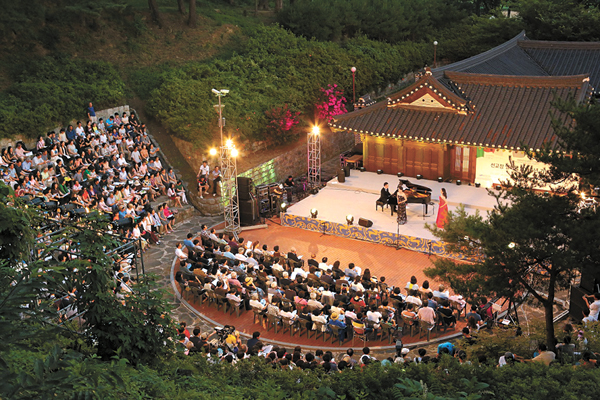 Chung Myung-wha and Chung Kyung-wha have served as artistic directors since 2010 and have worked to involve world-renowned artists in its Distinguished Artists Series.

This summer, the festival will spotlight master composers under the theme “The Immortal Classics: Bach, Beethoven, Brahms and Beyond.”

“We have been focusing on three regions that take important positions in classical music: North European countries, Italy and Spain,” said Chung Myung-wha. “The three composers, often called ‘Three Bs,” are immortal geniuses who are at the heart of Western musical history.” She added that while the artistic directors were studying their music, they decided to pay special attention to other composers whose name starts with the letter B.

As a result, the music of 26 composers ranging from the 17th-century on will resonate through the halls.

“We not only concentrated on playing renowned masterpieces but also tried to shed light on lesser-known pieces like Bruckner’s string quintet,” said Chung Kyung-wha.

The two artistic directors will also perform. In July 31, cellist Chung will play Bach’s cello suite in D major and on August 5, she will play the Piano Trio, Op. 70, No.1 “Ghost” along with pianist Kreiger. Chung Kyung-wha , a violinist, will also appear on July 12 and Aug. 3 to play pieces by Brahms.

Meanwhile, up-and-coming pianist Son Yeol-eum will participate in the festival’s organization as assistant artistic director. “I was also born in Gangwon so I have special affection to this festival,” she said. “I will do my best to overcome the considerable pressure on this role.”

For more information on ticket price and schedule, visit www.gmmfs.com or call 02-729-3394.