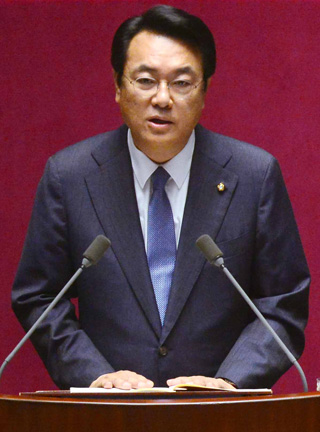 The 20th National Assembly held a session Monday to listen to a speech by Rep. Chung Jin-suk, the newly elected floor leader of the Saenuri Party. Every so-called negotiation bloc in the legislature, which refers to parties with more than 20 lawmakers, is given the opportunity to make a speech up to 40 minutes at the first extraordinary and regular sessions each year. Chung was the first to give the address in the 20th National Assembly, and the main opposition Minjoo Party of Korea will give its speech today.

Chung’s speech addressed a wide range of issues, but focused on the economy. He declared that the pro-business party of President Park Geun-hye will shift its policy to pay more attention to wealth distribution over growth.

“Until now, the Saenuri Party has concentrated its efforts to enlarge the pie that the country will divide and share. The issue of how to divide this pie was a lesser priority,” he said. “But today, problems that cannot be resolved with growth have piled up in front of us. To grow properly, the time has come for us to seriously think about the issue of distribution.”

Chung said social inequality in Korea is now serious. He said the top 10 percent of income earners in Korea take half of the total incomes, and such severe inequalities have made the society a sick one. “If the bottom 90 percent of workers were poor because they didn’t work hard, we must accept such a wealth polarization. But if they are forced to endure inequality and poverty because of structural and systemic problems, this is a different issue.”

Chung said the rigid hierarchy of employment - ranging from a salaried worker at a conglomerate to a contract worker of a subcontractor - has created a new feudal system in Korea, and proposed that society do something about it.

Although liberal politicians’ argument to increase the wages of contract workers is enticing, it is irresponsible populism, Chung said. “To improve the treatment of contract workers, someone must make a concession,” he said. “Salaried workers with relatively higher wages and greater benefits must concede first. This is the proposal of meeting in the middle by leveling downward.”

Chung said the Park Geun-hye administration’s labor reform initiative is based on this idea, asking for the liberal lawmakers to cooperate to pass relevant bills.

The floor leader of the ruling party also bluntly attacked inappropriate management practices of conglomerates. He said some conglomerates’ reckless business expansion must be controlled to protect small business owners. He said illegal transfers of ownership and unfair dealings among affiliates must be regulated.

He also criticized the ineffective and sometimes unlawful managements by tycoons of conglomerates, particularly attacking the owning families of Hanjin Shipping, Hyundai Merchant Marine and Lotte Group. “I am not saying we should dismantle conglomerates,” he said. “In a capitalist society, ownership must be respected. But it is also a problem when sons, daughters and distant relatives are all participating in management.”