After cancer fight, Won back in starting lineup

After cancer fight, Won back in starting lineup 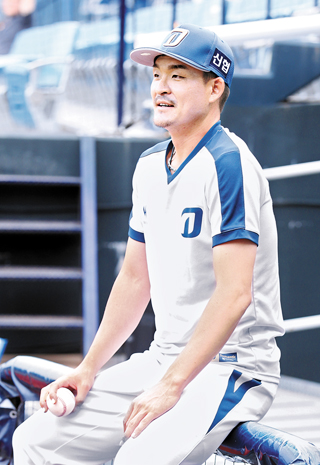 Won Jong-hyun returned to the league in May after recovering from secondary colorectal cancer. [YANG GWANG-SAM]

Won Jong-hyun of the NC Dinos has finally conquered the illness that forced him out of the league for over a year. Now after overcoming what could have been the end of his career, Won has returned to bolster the Dinos’ relief pitching lineup this season.

Won was diagnosed with secondary colorectal cancer in January 2015, which abruptly halted his career in the Korea Baseball Organization (KBO). He then underwent a long medical treatment, until finally returning to the first team roster of the Dinos on May 31. It was the first time that Won found his name in the roster since his last KBO match against Doosan Bears on October 17, 2014.

The KBO this season seems to be a duopoly of the Bears and the Dinos, who are outpacing the third-ranked Nexen Heroes by 13 and seven games. The top two teams have essentially guaranteed their spot for the playoffs in the fall, while the rest of the eight teams are struggling to secure the remaining spots.

For the Dinos, Park Son-min and Eric Thames are leading the way as the team’s batting lineup dominates in the league.

But, their effort would be in vain were it not for the team’s pitchers. Added to the pitching lineup of the Dinos is the fully recuperated Won.

Since he returned to the starting roster on May 31, Won has pitched in 10 games during the Dinos’ run, grabbing two holds and one win while collecting a 3.86 earned run average (ERA). Facing 42 batters, he has conceded only 14 hits and two home runs. His fastball during the seven games peaked at 152 kilometers per hour (94 miles per hour). As a reliever, Won quickly rose to assume an important role in the middle of the pitching lineup for the Dinos. “I feel like I am finally playing my game like I did before,” said Won. “I decided to forget about the difficulties I had to go through in the past couple of years and start anew.”

After his surgery, Won endured 12 sessions of chemotherapy, losing all of his hair in the process. Needless to say, those are painful memories which would be difficult for Won to put behind him completely. However, in the midst of it all, Won’s love for baseball held him steady. He never received any injections or treatment on his right arm because he did not want to damage his throwing arm in any way.

Video recordings of his past games motivated him to persevere through such an excruciating treatment procedure. He watched the recordings from the quarterfinals game against the LG Twins in October 2014. Won maxed his fastball at 155 kilometers per hour, surprising the fans as well as his opponents. To cheer for Won and to wish for his swift recovery, the Dinos players had the number 155 engraved on their hats last season.

After the doctors decided he was cancer-free in October 2015, Won finally joined the team during the spring camp early this year. Initially, no one suspected that Won would be returning to the first team roster this quickly, as his trainings in the beginning largely consisted of process of recovery. It was Won’s work ethic that expedited his return. “Trainers [on the team] didn’t even know my condition,” said Won. “It’s not like I injured my arm or shoulder. There was no standard procedure on how I was to go about the rehab. Right now, I’m just doing physical training twice a week for 30 to 40 minutes.”

At the moment, his weight measures at 83 kilograms (182 lbs), which is about five kilograms lighter than before his surgery. He needs to bulk up in order to throw a well-balanced pitch and decrease the chance of injury. “It’s not easy for to put on extra pounds. Eating a lot doesn’t really help. For the time being, I need to maintain my current physique,” Won said.

His experience in the past couple of years has made him a new person. He is now considered the team’s advocate for a healthy lifestyle, telling his teammates to eat more vegetables and less meat. While he was in the second team roster of the Twins after debuting in the pro league in 2006, Won often made do with instant noodles and fast food. “I think I really ruined my health then,” Won said. “I began to feel something curious with my body in 2013 but I never cared for it because I was too busy playing ball.”

Now, he does not obsess over playing baseball and setting records. “Now that I have given the second chance, I would like to enjoy this game,” Won added. “I never considered myself giving hope for others. I guess you never really know what’s to come in life.”