Hall of famer pulls out of event

Hall of famer pulls out of event 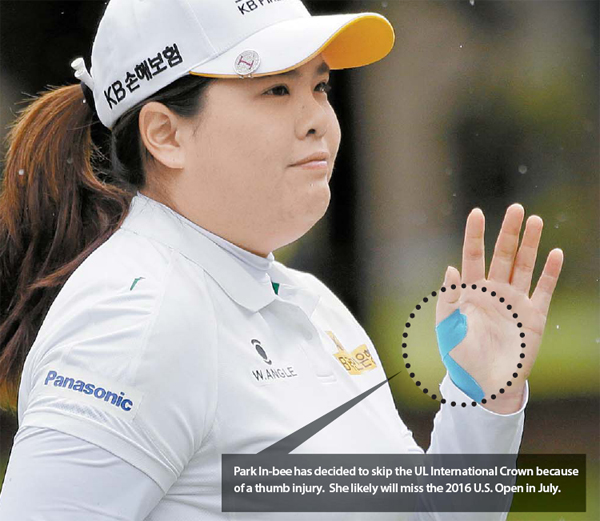 Park In-bee has decided to skip the UL International Crown because of a thumb injury. She likely will miss the 2016 U.S. Open in July. [AP/NEWSIS]

Park In-bee, who is currently ranked third in the world, has decided to skip the LPGA UL International Crown in Chicago from July 19 to 24, blaming the injuries that have plagued her throughout the season.

The Korean hall of famer has taken about a month off this season due to injuries in her back and thumb, but they have only worsened despite rest, forcing her to make the hard decision to bow out, according to her agency, Galaxia SM. Unless there is a dramatic change to her condition, it is unlikely she will participate in LPGA events for a while, her agency added. This means Park is likely to miss the 2016 U.S. Open as well, which is slated for early July before the International Crown. Park made history at the U.S. Women’s Open by becoming the youngest player to win the competition at 19.

The UL International Crown that Park is to miss due to her injuries is a LPGA biennial competition of four golfers representing eight nations. The nations were decided, according to the Rolex World Rankings after the KPMG Women’s PGA Championship and include Korea, the United States, Japan, Taiwan, Thailand, England, China and Australia.

During the inaugural event in 2014, Park played a phenomenal game, contributing to the team’s win over the United States during the hard-fought preliminary stage which went all the way to the playoff. Park was quoted as saying, “I felt compatriotism and patriotism that I have never felt before in other events and I would like to play in the next International Crown for this season.” Yielding her spot in such an event just shows how serious her condition is. “If I’m not at my full condition, I kind of feel like I have to give a chance to somebody else who can perform so much better than me at the moment,” Park said this month.

Jang, who has clinched two LPGA wins this season, from the Coates Golf Championship in early February and the HSBC Women’s Champions in early March, has been absent from the LPGA events after withdrawing from the Swinging Skirts LPGA Classic due to her physical conditions. Some of her symptoms include insomnia, blurred vision and dizziness. She has been under a tremendous amount of stress due to several unfortunate incidents earlier in the season, including the accident at the Singapore airport where Jang’s father dropped his bag and injured Chun’s back, causing Chun to miss several tournaments. Jang also got into a dispute with other golfers when she was reported to the LPGA authority for practicing her swings in the middle of a tournament, an illegal act that could have a golfer disqualified from a tournament.

Ryu So-yeon, ranked 11th, is the next runner-up to take up a spot on Team Korea’s roster. Besides Ryu, No. 5 Kim Sei-young, No. 6 Chun In-gee and No. 8 Amy Yang will represent Korea at the competition.

What’s more distressing about Park’s absence from the biennial event is that it also casts doubt on her participation in the Olympics in Rio this summer.

“Even if I am included in the roster for Team Korea, I will give up my spot if I am not in my full condition. You are representing a country in events such as the International Crown and Olympics, which means I cannot be greedy,” Park said during the Women’s PGA Championship.