Supplementary budgets will be considered

Supplementary budgets will be considered 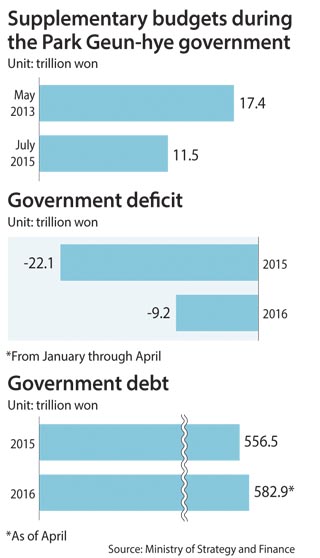 The Ministry of Strategy and Finance steadfastly maintained that it would “not consider a supplementary budget at all,” as repeated many times in its press releases, but at a meeting with Saenuri Party members of the special committee on job creation on Tuesday, First Vice Minister Choi Sang-mok said his ministry is aware of the need for an extra budget and is considering how fiscal policy can play its role.

“The ministry is feeling the need for it, and we are currently looking at the role of fiscal policy,” Choi said at the meeting. “The economy shows no sign of recovering in the short run.”

The third one is estimated to be as large as the previous ones, at least 10 trillion won, considering ongoing corporate restructuring and joblessness.

The government is scheduled to announce a comprehensive plan on the direction of economic policies for the second half of 2016, including a revised economic growth forecast and the possibility of a controversial supplementary budget next week.

It will also come up with measures to absorb people left without work due to the restructuring of the shipbuilding and shipping industries.

The ruling party’s committee on jobs, vice-chaired by Choo Kyung-ho, a former vice finance minister, announced that the committee and government officials discussed the need for an additional budget, considering possible joblessness amid the current corporate restructuring process.

“The central bank is dealing with the growth and job issues aggressively by expanding monetary policy,” Choo said. “It is time for the government to play an active role with its fiscal policy now.”

As for the budget size, Choo said the committee suggested more than the government is considering at the moment.

Calls for more aggressive fiscal policy have grown in recent weeks, especially after the Korean central bank unexpectedly cut its base rate on June 9.

The Bank of Korea slashed its key interest rate from 1.5 percent to an all-time low of 1.25 percent, the first cut in 12 months, to help the floundering economy.

Bank of Korea Gov. Lee Ju-yeol cited concerns about increasing downward risks in the domestic economy largely due to a slow recovery in consumption and exports.

The market evaluated the central bank’s decision as bold and swift, and investor attention moved to whether the government will come up with an extra budget or not.

“There is a limit to securing sustainable growth solely with monetary policy,” Lee said during the press conference.

“The supplementary budget is an issue on which the government needs to make the call, but they know very well the influence that the government’s fiscal policy will have on growth.”

Some experts agree with the Bank of Korea governor.

“There is almost no chance of another rate cut,” said Baek Woong-ki, a financial economics professor at Sangmyung University. “The government needs to prepare a supplementary budget to address the restructuring and labor market issues.”

However, worries about the fiscal soundness of the government remain an obstacle.

Despite a 22.9 percent increase in tax revenue as of April, the fiscal balance sheet showed a 9.2 trillion won deficit, according to data by the Ministry of Strategy and Finance.